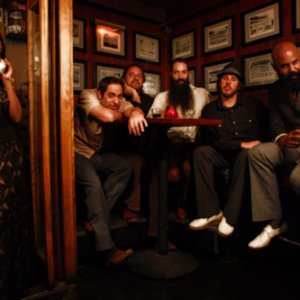 Dengue Fever's psychedelic take on the Cambodian pop sounds of the 60s makes them a unique rock'n'roll success story. They draw enthusiastic crowds from LA to the UK, from Maui to Moscow, and leave critics rummaging through their thesauruses looking for new superlatives to describe their sound. The band's latest release, the documentary feature film Sleepwalking Through The Mekong (DVD/CD Soundtrack) continues the story and evolution of the band as they travel to Cambodia as the first Western group to perform the music of Cambodia since the fall of the Khmer Rouge.

Brothers Ethan (keyboards) and Zac (guitar) Holtzman started Dengue Fever in 2001 when they discovered they shared a love for the Cambodian pop music of the 60s. After adding sax man David Ralicke (Beck/Brazzaville), drummer Paul Smith and bassist Senon Williams, they went looking for a Cambodian singer. Enter Chhom Nimol, who performed regularly for the King and Queen of Cambodia. Her powerful singing, marked by a luminous vibrato that adds exotic ornamentations to her vocal lines, and hypnotic stage moves based on traditional dances, complemented the band's driving Cambodian/American sound.

The Cambodian pop music of the 1960s seems an unlikely template for an American band, but that sound captivated Ethan Holtzman during a trip to Cambodia in 1997. Before he flew back to L.A., he picked up every cassette of Cambodian pop from the 60s he could find. Back home, Zac Holtzman had just returned to L.A. after living in San Francisco for 10 years. He'd been listening to a compilation of Cambodian pop and when the brothers reconnected, they decided play their version of Cambodian rock. They hung out in the Long Beach Cambodian community to find a singer.

?We saw Chhom Nimol at The Dragon House,? Zac Holtzman recalls. ?She was already a star in Cambodia and made a living singing traditional music at Cambodian weddings and funerals.? Chhom wasn't sure she wanted to sing with Americans, but Dengue's dedication to the sounds of Cambodia won her over. Chhom's singing and the band's Americanized Cambodian psychedelia created a strangely familiar and totally distinctive sound. Dengue Fever was an immediate hit, both in the Cambodian clubs of Long Beach and regular LA rock venues.
The band's eponymous debut was mostly covers of Cambodian classics: a tribute to the singers and songwriters who were killed by the Khmer Rouge. Their second album, Escape From Dragon House, written almost entirely by the band, was more psychedelic, freer, looser and more experimental than the debut. Chhom Nimol's powerful vocals, with lyrics delivered mostly in Khmer (pronounced ?cam ? aye?), showed an impressive melodic range, complimented by the band's relentless grooves. It also incorporated the rhythms of 60s Ethiopian jazz, another style that used American rock, funk and R&B as its template. The album featured ?Ethanopium,? a cover of a tune by Ethiopian singer Malatu Astatke that was used by Jim Jarmusch in his film Broken Flowers. ?One Thousand Tears of a Tarantula? was later featured on the soundtrack as well as the Showtime series Weeds. Their third release, 2008's Venus on Earth, consisted entirely of original material, with several songs performed in English, furthering the band's overall goal to fuse American and Cambodian styles.

Sleepwalking Through the Mekong

In The Ley Lines