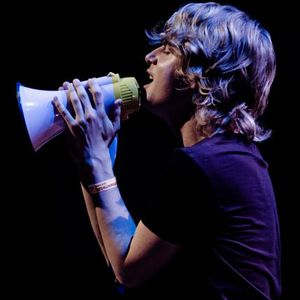 The sparkle in his eye balances the weight of his words. ?It's been quite a year.' Wouter Hamel, whose first two albums, ?Hamel' and ?Nobody's Tune' captured hearts in his native Netherlands and spread like wildfire throughout Europe, Japan, and Korea, is back with his new record, ?Lohengrin', after a long and winding road full of surprises; not all of them pleasant. ?This year has been one full of adventure.'

Wouter Hamel, whose first two albums, ?Hamel' and ?Nobody's Tune' captured hearts in his native Netherlands and spread like wildfire throughout Europe, Japan, and Korea, is back with his new record, ?Lohengrin', after a long and winding road full of surprises; not all of them pleasant.

?This year has been one full of adventure.'

Being confronted with the painful breakup of a 9-year relationship is hard enough. However, when this happens in the same week as the sudden departure of one of your trusted band members, then it just might become too much. For Wouter, however, these challenges were faced head on, and he's emerged stronger and more determined than ever. Hamel even embraced the opportunity of producing his own album for the very first time, so yet another break up, that with his longtime producer, Benny Sings, was also in the cards.

The ideas started flowing during the promotion of the second album ?Nobody's Tune', when Hamel decided to take some time to write in Paris.

?I wanted to escape the rat race for a while.' The writing process continued in the summer of 2010. ?I needed to be in a place by myself. I decided to work in my parent's place, they have a lovely converted barn and that's where I did the second part of the writing for the album. In the barn I could work through the night, something I didn't do in Paris ? there's too much to do there at night...'.

The inspiration behind many of the songs is Wouter's desire to be honest and to write directly about all of the changes he was going through ?When Pieter, my pianist, left, it was a big shock, but I respect his decision. I was very happy to find a new pianist, Thierry Castel, an instrumental songwriter, who made some amazing contributions to several of the songs on the new album.' This new collaboration was of course enhanced by the amazing growth and development of all his band members (Rory Ronde, Sven Happel, Jasper van Hulten, and Gijs Anders van Straalen). Taking a tight band and adding a new collaborator has created a new dimension in Hamel's music ? his cleverly crafted lyrics are now housed in sometimes bombastic, occasionally pompous arrangements, which reveal themselves even more with every listen.

Wouter was able to take more risks on this album, thinking outside the box; often nowhere near the box. He had complete and utter freedom to really follow his gut, and make an album without concessions. Experimenting with different sounds and techniques, and having no formal training as a producer, he followed his ears and his heart and is very proud of the results.

And the title? It might sound a bit obscure to some, but to Hamel, it's quite significant. ?I had this old demo, there was an E chord, and I just started singing ?take me there oh Lohengrin' ? at the time, I was thinking of a street in the Hague. I looked up what it meant and Lohengrin is actually the son of Parcival, and a knight of the Holy Grail. And the myth goes that Lohengrin comes to Elsa in Antwerp and the only condition for them to be together is that she is not allowed to ever ask of his origin or what happened to him before. In my song, I was singing ?don't blink your eyes, I'll disappear'; I kind of personified Lohengrin into someone who could sweep you away if anything goes wrong. I love the link there. It's all about a new beginning- putting the past behind, shedding old skin and starting a new. That's what Lohengrin means to me.'

Hamel had to dig deep, on his own, to create Lohengrin. And he's struck gold. His vulnerability has turned into his strength, and he has dropped an album full of surprises, without compromise.