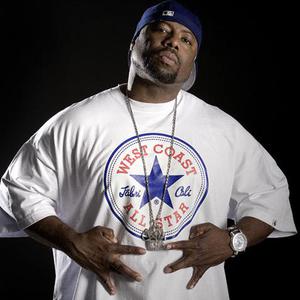 There is more than one artist called WC: 1) William L. Calhoun, Jr. (born in 1970), better known by his stage name WC pronounced "Dub-C" and not "Double-U-C", is an American West Coast rapper. He was born in Texas, but moved to Los Angeles at an early age. Known for his long braided goatee, sharp lyricism, and Crip walking, WC has been a staple in West Coast gangsta rap since the early 1990s. He also is a known Crips member from 111 Neighborhood crip gang a California based gang.

1) William L. Calhoun, Jr. (born in 1970), better known by his stage name WC pronounced "Dub-C" and not "Double-U-C", is an American West Coast rapper. He was born in Texas, but moved to Los Angeles at an early age.

Known for his long braided goatee, sharp lyricism, and Crip walking, WC has been a staple in West Coast gangsta rap since the early 1990s. He also is a known Crips member from 111 Neighborhood crip gang a California based gang.

WC began his career with underground rap groups such as Low Profile and WC and the Maad Circle. His 1998 solo debut The Shadiest One landed in the Top 20, featuring such singles as "Cheddar", "Just Clownin'" and "Better Days". The Ghetto Heisman followed in 2002 and featured the song "The Streets", which also landed in the Top 20.

3) WC was a swedish punk band. It was formed in 1979 by guitar player Niklas Andersson and bass player Tommy Eger. After a turbulent and somewhat unserious start, the band got it's first gig in autumn 1980 as a trio with J?rgen Br?ms on drums and vocals. The group became a quartet in spring 1981, when they picked up Perry Ingman for a drummer and J?rgen moved over to guitar. With this lineup they won a rock band competition in autumn ?82 in which the price was to record a single. The single was recorded the days before new years eve the same year in Pop Studio in Eskilstuna. A-side was ?Polis, polis? (Police, police) and B-side was ?Pappershj?ltar? (Paper heroes). The record was sold in a somewhat different way. A concert was organized where the audience, for only 20 SEK (~$2), got both the single and the concert with three bands. When J?rgen in early 1984 decided to leave his home town the band decided to play a farewell concert in Eskilstuna Folkets hus. J?rgen was replaced with Tony Andersson, previously singer in the band Kontaktlim, but shortly thereafter the band split up anyway.
The former members kept playing together in different constellations. Perry and Tony played in, among others, Pussy Galore and GASTONES (president gas), and Tommy and J?rgen (who moved back to Eskilstuna in 1986) played together, for a short while, as Alla presidentens m?n.
WC was reunited in 1999, with all former members except Niklas. Among other things hey played at Pipaluckbolaget's gala in Eskilstuna, and also rerecorded 12 old WC songs. The recordings were supposed to be released on Rosa Honung Records, but they never were and WC went under once again.
Official webpage: http://hem.passagen.se/mahonie/WC/

4) WC was born in New York City during 2003. The band chooses the controversial name ?WC? in an effort to contradict the glamorous and fashionable situation flooding the world of modern music.

On July 2007 Sterling Sound in New York chooses WC's ?Ashes? to be featured on ?Sterling Sound's emerging artists player? an honour that places WC among the best newcoming bands worldwide.

Their debut album ?WC? is released by Legend Records on December 10, 2007 throughout Greece and Cyprus.
The initial line up (2003) consisted of Wastor (Vocals, Guitars, El.Violin), Amanita (Drums, Vocals) and bassist Kevin Hummel. During the following 2 years they colaborated with various bands and performed in various clubs around the NYC area including CBGBs and the Barracuda. The band's sound during that time was heavily inspired by the nu-metal and industrial-metal scene. They recorded a four song promo CD that included ?Mr. Pink? a song that attracted the interest of Daniel Glass of Artemis Records, one of the largest independent labels in NYC.

2005 finds Wastor and Amanita returning to Athens Greece, while they begin recordings for their first album in the Greek language. The band's sound evolves towards a darker Gothic sound and they release the song ?Ou Foneyseis? (?Thou shall not Kill?) featuring Georgia Kefala (Mple) on vocals, and their first video clip ?A.M.Y.M? directed by Constantine .

WC's aggressive sound along with their heavily inspired by gothic imagery stage image, attracted the interest of L. Mahairitsas (a Greek platinum selling singer). The result of WC's collaboration with L.Mahairitsas was the song ?Falaina?, released by Minos-EMI Greece, and presented live in Thessaloniki, on a show aired on ?NET? (National Greek Television) that watched more than half a million people.

In February 2006, WC return to their initial trio form, with the addition of Johnny Ray on el. bass, a position that later will be taken by Manos ?Elfman?

WC's debut album ?WC? released Dec 20, 2007 and is a ?bi-lingual? album having versions of their songs both in Greek and in English. Within 2 weeks WC hit the Greek charts while the media praises its release in their critics. Their video clip for ?Ou Foneyseis? will be nominated for best video of the year 2008 (category: alternative) by MAD TV (Greece's biggest music video TV network).

Revenge Of The Barracuda

Curb Servin' (With The Maad Circle)