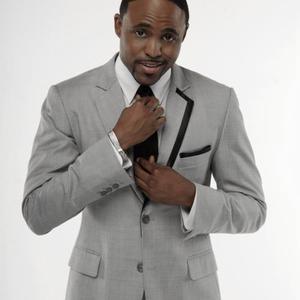 On September 16, 2008 Peak Records/Concord Music Group released Wayne Brady's debut album, the appropriately titled - A Long Time Coming. The Emmy Award winner is the consummate entertainer, whose talent truly knows no boundaries. As a stage, screen and live performer Brady is unparalleled. But now, he turns his attention to his first love: music. The 12-track R'n'B collection features Brady's own compositions standing side by side with his loving, inspired reinventions of such classics as Sam Cooke's ?A Change Is Gonna Come,? The Beatles' ?Can&rsquo;T Buy Me Love? and Stevie Wonder's ?All I Do.?

But now, he turns his attention to his first love: music. The 12-track R'n'B collection features Brady's own compositions standing side by side with his loving, inspired reinventions of such classics as Sam Cooke's ?A Change Is Gonna Come,? The Beatles' ?Can&rsquo;T Buy Me Love? and Stevie Wonder's ?All I Do.?

Brady's career began as one of the improvisational theater performers in the British version of Whose Line Is It Anyway?, along with Ryan Stiles, Colin Mochrie, and host Clive Anderson, to which he became a regular on the American version, hosted by Drew Carey. In 2003, Brady won a Primetime Emmy Award for Outstanding Individual Performance in a Variety, Musical or Comedy Series for his work on the show, the only person to win the award for a television series, as opposed to a special, since Dana Carvey in 1993.

He went on to star in his own ABC variety show in 2001 called The Wayne Brady Show, which failed, and a daytime talk show of the same name in 2002, which lasted two seasons and won four Daytime Emmy Awards, two of which went to Brady for Outstanding Talk Show Host. Brady also guest-starred on The Drew Carey Show in 1999 and 2000 to take part in Drew Live and Drew Live II. On the show, Brady played several games taken from Whose Line Is It Anyway? for the two episodes with other characters.

In 2004, Brady joined the long-running Broadway revival of Chicago, playing the role of lawyer Billy Flynn. He also appeared briefly in the final episode of the 2004 season of the comedy Reno 911!. Additionally, Wayne guest starred on the Sci Fi Channel's hit series show Stargate SG-1 as the first-prime of the Goa'uld System Lord, Ares.

Brady wrote and sang the theme song for Disney's popular animated series The Weekenders. In 2005, he sang and recorded Jim Brickman's original Disney song "Beautiful" (a cover of All-4-One's 2002 hit "Beautiful As U") and its Christmas version.

In 2006, Brady became the host of TV Land's That's What I'm Talking About, a talk show discussing the role of African-Americans in the entertainment industry From August 29 - September 29, 2006, Brady hosted the FOX show Celebrity Duets.

On November 27, 2006, Brady made a guest appearance on the CBS sitcom How I Met Your Mother, playing James, the gay brother of Neil Patrick Harris's character Barney. His character conflicts with Barney due to his choice to marry and adopt a baby. Brady returned to the show in 2007 in the episode The Yips, in which he is shown to be indirectly responsible for Barney's current superconfident personality. He had also appeared as a guest star for the MTV show Nick Cannon's Wild 'N Out. Brady also helps with Adult Swim TV show Robot Chicken.

Brady has also gone "north-of-the-border" and guest starred in Colin Mochrie's CBC comedy, Getting Along Famously. He has also appeared on the episode "You Don't Know Jack" on the television show Dirt and also guest starred on the show 30 Rock, where he played the role of Steven Black, Liz Lemon's date for The Source Awards. Steven and Liz's relationship quickly ended when they discovered they had nothing in common and Liz accidentally shot him in the buttocks.

Brady was the co-host of the short-lived VH1 show "Vinyl Justice" in 1998. In 2007, ABC Family premiered the movie called "The List" starring Wayne Brady. The List is about a man who proposes to his girlfriend. When she says no, he begins to make a list of qualities he believes his "Perfect Woman" should have.

Brady starred in Flirt, a comedy pilot developed for The CW Television Network, which if it had been picked up would have aired in the 2006-07 television season.

Brady guest starred as Julius Rock's gifted younger brother, Louis, in the television series, Everybody Hates Chris. He currently hosts a singing game show called Don't Forget the Lyrics! on FOX. He also performs "Wayne Brady: Making it up" at the Venetian Hotel in Las Vegas, Nevada four nights a week. He was also on two episodes of Kevin Hill. Wayne's debut album was released on September 16, 2008. The song "A Change is Gonna Come", a cover of the popular 1964 single by Sam Cooke, earned Brady a Grammy nomination in the Best Traditional R&B Vocal Performance category.