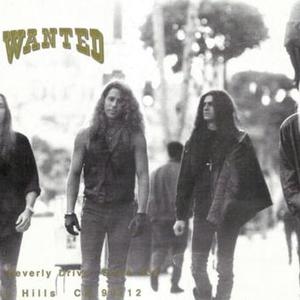 WANTED is the name of more than one artist/group: 1. Wanted, consisting of leader Kim Jae Suk, members Ha Dong Kyun and Suh Jae Ho and producer/composer Jeon Sung Hwan, first debuted in 2004 under M-Boat Entertainment with the album Vol.1 Like The First. Their leading single from their debut album ??(??) Baljag (Reaction), was reasonably popular and received considerable airplay and Wanted was invited to perform the song at numerous occasions.

1. Wanted, consisting of leader Kim Jae Suk, members Ha Dong Kyun and Suh Jae Ho and producer/composer Jeon Sung Hwan, first debuted in 2004 under M-Boat Entertainment with the album Vol.1 Like The First. Their leading single from their debut album ??(??) Baljag (Reaction), was reasonably popular and received considerable airplay and Wanted was invited to perform the song at numerous occasions. Having a unique balance of a high, clear voice (Jae Suk), a strong pleasant voice (Jae Ho), and a husky, powerful voice (Dong Kyun), they were touted as one of the hottest newly debuted groups.


However, not long after their debut, Wanted met with a severe car crash. Suh Jae Ho unfortunately passed on, and Kim Jae Suk was left in a coma with massive injuries. Ha Dong Kyun and Jeon Sung Hwan were lucky to escape with minor injuries. Wanted's activities were thus suspended while bandmates and fans alike mourned for Suh Jae Ho. Kim Jae Suk recovered from his coma and had to spend a long time recuperating and treating the scars left from the accident. In between 2004 and 2006, there was no activity from any of the Wanted members. Ha Dong Kyun occasionally worked for one or two drama OSTs and Wanted seemingly had disbanded.


In 2006, Ha Dong Kyun surprisingly released his Vol.1 Stand Alone which garnered attention and reintroduced him to the music scene. His album enjoyed reasonable success for a new (he was considered new) artiste. Kim Jae Suk, recuperating from his injuries, expressed his desire to sing again.


In 2007, Wanted then announced their second album. Reunited with 7Dayz bandmate Lee Jung, Wanted's Vol.2 - 7Dayz & Wanted was released in July 2007. Lee Jung, former bandmate of Suh Jae Ho, Jeon Sung Hwan and Ha Dong Kyun in 7Dayz, had remained good friends with his bandmates even after disbanding and had decided to participate in the album as a tribute to his much-missed friend. Staying true to their R&B-esque roots, the album has powerful ballads such as I Promise You and more light hearted tracks such as Wonderful Day. Epik High also participated in the album.

In 2012 they released their third album "Vintage".


2. WANTED burst onto the Indianapolis hard rock scene in the early 90's with a blend of memorable hooks and in your face vocals. Sharing the stage with talented local acts such as Sweet F.A., Schoolboy Crush, Ma Kelley, Snakeskin Cowboy, Felony, and Nova Rex, WANTED had become a Midwest favorite.

WANTED was made up of five very talented musicians from all over America. Bobby Sisk, a multi-talented musician from Miami, Florida, began his musical career at age 9 when he started out playing piano, guitar, and drums. At age 23, Bobby finally found himself in WANTED making a name for himself as a premier vocalist for an up and coming band. Scott Cole, an experienced rock drummer, started at the age of 14 in Dayton, Ohio. Scott had quite a bit of experience being on the road and felt at home behind the drums. Eric "Cruise" Saylors, one of the two guitarists, originally from Kokomo, Indiana, began playing at age 15. After playing in several different bands, Eric met guitarist Tadd Wilson, originally from Rodchester, Indiana, and began to form WANTED. With Tadd's natural guitar ability and Eric's seasoned writing skills, they made a fantastic guitar duo. Erikk D. Lee originally from Indianapolis, Indiana, started out playing the drums, but went on to play the bass at the age of 16. Erikk was responsible for pounding out the memorable low notes during their energetic live shows.

After meeting Bob McCutheon, a well know manager of MCA Recording artist Sweet F.A., many things started to happen for the band. After a couple of months of hard work and preparation with their new manager, it was time to hit the road. From the word go, WANTED opened for two major acts in ENUFF Z NUFF and BAD ENGLISH.

Showcasing for various major record labels paid off when WANTED was offered a label contract with Geffen Records. Tom Zutant and Vicky Hamilton, Geffen Executives, brought WANTED into Cherokee Studios in Hollywood, CA to record "Be Still My Heart" and "Lost in Me Forever". Relationships between the record label and band management dissolved any hopes that WANTED would be signed.

We Own The Night (CDS)

I Found You (CDS)