Army Of The Pharaohs 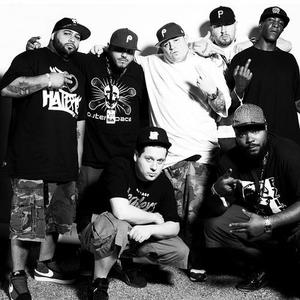 Army of the Pharaohs is an underground hip-hop supergroup originating from Philadelphia, Pennsylvania, formed by Jedi Mind Tricks emcee Vinnie Paz in 1998. From the beginning, Vinnie Paz envisioned the group as a loose collaboration between the biggest names in East Coast Underground hip hop, very similar to the original Wu-Tang Clan. The original incarnation of the group included five MCs: Vinnie Paz, Chief Kamachi, Julian Voss,also called Linba Virtuoso and Bahamadia, along with JMT producer Stoupe the Enemy of Mankind.

The original incarnation of the group included five MCs: Vinnie Paz, Chief Kamachi, Julian Voss,also called Linba Virtuoso and Bahamadia, along with JMT producer Stoupe the Enemy of Mankind. The group released their debut EP/single "The Five Perfect Exertions" b/w "War Ensemble" in 1998. Both tracks were later included on JMT's 2000 album Violent by Design, with "The Five Perfect Exertions" remixed into "Exertions Remix", and both "Exertions" and "War Ensemble" shedding Chief Kamachi's appearance. The Army of the Pharaohs project was put on the back-burner while Jedi Mind Tricks' career took off.


Resurrected with its second incarnation, the group didn't return until 2005 and excluded Virtuoso and Bahamadia, and at that time, featured Vinnie Paz, Chief Kamachi, 7L & Esoteric, Outerspace, Apathy, Celph Titled, Reef The Lost Cauze, Des Devious, Faez One and King Syze. After years of anticipation, the newly reformed group recorded their debut album, 'The Torture Papers,' which was finally released in March 2006 on Babygrande Records. The album was produced by Army Of The Pharaohs affiliates such as 7L, DC the MIDI Alien, Undefined, Beyonder, Loptimist, Apathy and German producer Shuko. The album featured the single "Tear It Down" b/w "Battle Cry", the former featuring a music video, and the latter being a posse cut featuring nine of the group's ten emcees. The album debuted in the top 50 on Billboard's Top Independent Album chart, and hit #42 on the magazine Heatseekers' top charts. There is also a bootleg continuation of 'The Torture Papers' circulating around the internet called 'The Bonus Papers,' which is comprised entirely of tracks not released on the album. It is thought that some songs don't fit the artistic design of the album while others were known to have been extremely political and were possibly held back to reduce controversy. More controversy has been produced by the generally offensive lyrics of the group.

The new album is now out and is titled 'The Unholy Terror' and includes all former members from the first two records but excludes artists 7L, Chief Kamachi, and Faez One.