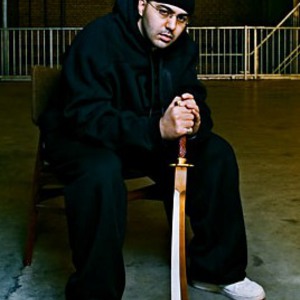 Cilvaringz is one of the few hip hop artists from Europe (Born in Dordrecht, the Netherlands) who managed to turn his dream into reality. Hip hop music first came to his attention at the age of 13. In 1993, a player on his basketball team played him a tape of the Wu-Tang Clan and Cilvaringz fell in love with the music. In 1995 the Clan hit the peak of their success and was showing itself to be continually growing.

In 1995 the Clan hit the peak of their success and was showing itself to be continually growing. And while still studying the art of hip hop, Cilvaringz became more and more ambitious and planned to join these rap icons and expand their 2nd generation (often referred to as Wu-Tang Killa Beez) internationally.

To prove his ambition, motivation and talent, Cilvaringz jumped on stage during a Wu-Tang Clan concert on the May 26th, 1997 in Amsterdam and performed a 2 minute freestyle. Wu-Tang's leader and producer RZA, who was standing by the DJ table, took notice of the positive responses from Method Man and Ol' Dirty Bastard and invited him to the backstage area to 'talk about something important'.

Cilvaringz awaited patiently on stage, but as the concert came to an end, a group of concertgoers became violent and security was forced to clear the venue. Cilvaringz, who was close to reaching his goal, lost touch with RZA but went back home more determined and confident about his potential and dream to join the Wu-Tang family.

NEW YORK
In December '97, Cilvaringz went on his first trip to New York determined to find RZA. RZA however, had moved most of Wu-Tang's business to Los Angeles and was out of town. Still motivated and not want to give up, he kept flying back and forth to New York between 1997 and 1999.

During his many brief visits to the Clan's office, nail studio and the Wu-Wear clothing store, Cilvaringz met a few people close to RZA and ultimately managed to hand his demo to RZA's mother Linda Hamlin (RIP) and sister Sophia Diggs.

In 1999, after numerous letters and CDs, Cilvaringz, now on his fifth trip to New York, decided to camp in front of the Razor Sharp Records office during office hours and wait until RZA or any of his close associates came by.

Cilvaringz relates: "I knew he was in town from talking to Clan associates whom I met during my previous visits to New York. It was only a matter of time before RZA would stop by the office, so the best thing was really to just wait. I didn't trust anyone with my demo but him."

THE MOMENT
A day passed and office hours were over. It was then that Sophia Diggs, RZA's sister who ran the Wu-Nail studio in Staten Island, came by to pick up a package from the office and recognized Cilvaringz from his previous visit to her studio. Sophia took Cilvaringz to the office and called RZA to inform him of 'this young kid who flew all the way from Europe to see him'. The office was still full of people waiting for RZA and as he patiently waited on the couch, Sophia played his demo loud enough for everyone to hear.

"People started asking each other who this artist was and it gave me a confident feeling'" says Cilvaringz. Minutes later RZA entered the office while the demo was still playing loud through the speakers.

"RZA bounced his head, listened to about half of the song and looked around the waiting room as if he was looking for the artist. Sophia pointed me out, he invited me to his office and said he remembered me from Amsterdam and had actually read all my letters. Then he said I proved my continuous motivation and determination by flying all the way from Europe to see him. My life changed in those 5 minutes."

Cilvaringz highly anticipated debut album "I", is scheduled for an April 9th, 2007 release (US). The album will include a bonus 62min DVD, which features a tour documentary, studio footage, interviews with Cilvaringz and RZA, full live performances and more. "I" was released March 21st, 2007 in Japan without the extra DVD. The album features RZA, GZA, Method Man, Ghostface Killa, Raekwon, Masta Killa, Sunz Of Man, Killarmy and a special skit by Ne-Yo & Pharell. The album is produced exclusively by RZA, Cilvaringz & The Wu-Elements (Allah Mathematics, True Master, Bronze Nazareth and 4th Disciple).

"I know how Wu-Tang fans think, they're like crack addicts. They want that crack over and over and over. If a dealer offers them something new, they leave it for what it is and move on to the next crack dealer. Wu-Tang fans are the same, they want that classic Wu-Tang sound. They'll allow you to jump in and out of different chambers, but once you leave the temple itself, you lose them. I know that for a fact... I'm one of them."

From Cilvaringz's MySpace: "This album is in my opinion the only album since 2001 that comes close to the original rugged Wu-Tang sound from the 90's".

"So for those who love that gritty Wu-Tang sound, and love songs with depth, I believe this album will be a great listen".