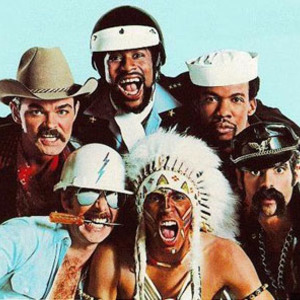 Village People were a novelty disco band of the late 1970s. The group were as well known for their outrageous on-stage costumes (the members dressing up as a police officer, an American Indian chief, a construction worker, a soldier, a leatherman (biker) and a cowboy) as for their catchy tunes and suggestive lyrics. The band was assembled in 1977 and managed by two French musicians, Jacques Morali and Henri Belolo, specifically to showcase and perform their disco music creations. Much like Frank Farian's Boney M.

The band was assembled in 1977 and managed by two French musicians, Jacques Morali and Henri Belolo, specifically to showcase and perform their disco music creations. Much like Frank Farian's Boney M. or Spice Girls, the group was manufactured. Despite the French song writers, the songs were all in English.

The band's name references a well-known gay area of New York City, Greenwich Village. Jacques Morali and Henri Belolo got the inspiration for creating an assembly of American man archetypes based on the gay men of the Village who frequently dressed in various fantasy ways. The police officer character is said to have been inspired by an actual Sacramento County (California) Sheriff's Deputy - David Orth.

The United States Navy considered using the Village People hit "In the Navy" in a recruiting advertising campaign on television and radio. They contacted Belolo, who decided to give the rights for free on the condition that the Navy help them shoot the music video. Less than a month later, Village People arrived at the San Diego Naval base. The Navy provided them with a war ship, several airplanes, and hundreds of Navy men. When the video started showing and the Navy started the planned ad campaign, some newspapers protested using taxpayer money to fund music videos (especially for a group considered by some to be "morally dubious"). The Navy quickly cancelled the campaign. The scandal tremendously boosted the popularity of the song.

Other hits include their trademark "Macho Man", "Go West", and "YMCA". More than twenty years later, a dance that involves forming the latter four letters with the dancer's arms and legs is still popular at summer camps, office functions, wedding receptions, school dances, sporting events and B'nai Mitzvahs. In the middle of the seventh inning of each baseball game at Yankee Stadium, the grounds crew take an on-field break from grooming the infield to dance as "YMCA" is played, typically to enthusiastic cheers from the fans.

An interesting fact about the Village People recordings is that all of the background vocals for their best known recordings where provided by 2 session musicians who went on to front notable bands; Bill Champlin from Chicago, and Richard Page (musician) from Mr. Mister.

The group also appeared in their 1980 feature film Can't Stop the Music, directed by Nancy Walker, written by Allan Carr and Bronte Woodard, music and lyrics by Jacques Morali and starring Steve Guttenberg, Valerie Perrine, Bruce Jenner, and Village People. The movie "won" the Worst Picture and Worst Screenplay prizes at the 1980 Golden Raspberry Awards in March 1981 and was nominated in almost all the other categories.

In 1981, with the popularity of disco waning and New Wave music on the rise, Village People replaced their on-stage costumes with a new look inspired by the New Romantic movement, and released the New Wave album Renaissance; it was not a commercial success.

In 1994, the Village People joined the German national soccer team to sing its official World Cup '94 theme, "Far Away in America."

Starting in 2004, Village People performed as the opening act for Cher in her Farewell Tour until it ended in April 2005.

From July 18th to July 20th, 2004, Village People performed in Berlin for three shows as an opening act for the German punk band Die ?rzte.

The Best Of The Village People: 20Th Century Masters

Sex Over The Phone

Fox On The Box

The Best Of The Singles