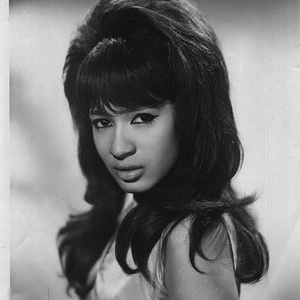 Veronica refers to at least two recording artists: 1. Ronnie Spector (born Veronica Yvette Bennett, 10 August 1943, in New York City) was the lead singer of the girl group The Ronettes, and is known as the "original bad girl of rock and roll". 2. Veronica (born Veronica Mehta) is an Indian R&B singer based in London, UK, who sings in Hindi, Urdu, English and Punjabi. 1. From a very young age, Ronnie took to singing, and her large, close family encouraged her to do so, along with the other members of the Ronettes, her sister Estelle Bennett and cousin Nedra Talley.

1. Ronnie Spector (born Veronica Yvette Bennett, 10 August 1943, in New York City) was the lead singer of the girl group The Ronettes, and is known as the "original bad girl of rock and roll".

2. Veronica (born Veronica Mehta) is an Indian R&B singer based in London, UK, who sings in Hindi, Urdu, English and Punjabi.

1. From a very young age, Ronnie took to singing, and her large, close family encouraged her to do so, along with the other members of the Ronettes, her sister Estelle Bennett and cousin Nedra Talley. The Ronettes were a multiracial group, which was a bit unusual during the 1960s. The Bennetts' mother was black and Native American; their father was white. In her autobiography, Ronnie Spector said that at one point in her childhood, she was not sure if she was black or white.

The Ronettes, who were produced and managed by Phil Spector, had huge hits with "Be My Baby", "Baby I Love You", and "Walking in the Rain" in the early 60's, but they disbanded in 1966 after the public apparently lost their taste for the girl group sound. From 1968 to 1973, Ronnie was married to Spector, and took his name professionally. However, by her own account he kept her a near-prisoner and limited her opportunities to pursue her musical ambitions.

In early 1971, during Phil Spector's tenure as head of A&R at Apple Records, Ronnie recorded the single "Try Some, Buy Some"/"Tandoori Chicken"; released as Apple 33 in the UK, Apple 1832 in the U.S. The A side of the single was written by George Harrison, and produced by Harrison and Spector. Although the single was not a big hit, it had one lasting influence: when John Lennon recorded "Happy Xmas (War Is Over)" later the same year, he asked Spector to reproduce the same mandolin-laden 'Wall of Sound' that he had created for "Try Some Buy Some". (Lennon liked the rockabilly B-side too, and is reported to have sung it at his birthday party in New York in October 1971.)

In 1986 Eddie Money had a big hit with "Take Me Home Tonight," on which Spector was featured prominently as a guest vocalist, singing part of the chorus (where she is introduced by Money singing "just like Ronnie says...") of "Be My Baby." She also sang a duet with Southside Johnny on "You Mean So Much To Me Baby". Billy Joel's 1976 hit "Say Goodbye To Hollywood" is a tribute to Spector; Spector herself covered it, as did Bette Midler and other artists.

Her autobiography, Be My Baby, How I Survived Mascara, Miniskirts, and Madness, co-authored by Vince Waldron, was published in 1989 and became an international bestseller. In 2004, Onyx books republished the book in a revised and updated mass market paperback edition.

In 1999 she released the critically acclaimed album She Talks to Rainbows which featured a few cover versions of older songs. Joey Ramone acted as producer, and appeared on stage with her to promote the record.

She now lives in Connecticut with her second husband Jonathan Greenfield and their two sons, Austin Drew and Jason Charles. She also hosts an annual Christmas party at BB King's bar and grill in New York.

Spector's most recent album Last of the Rock Stars (High Coin Records) has been released. A new single, "All I Want," accompanies the album. Keith Richards and Patti Smith are among Spector's collaborators on the album. Spector herself has co-produced two of the songs.

In 2005 Spector sang "Ode to L.A." with the Danish rock group, The Raveonettes, on their album "Pretty in Black."

The Ronettes were inducted into the Rock and Roll Hall of Fame in 2007.

2. Aged 16, Mehta successfully auditioned for the part of female vocalist for the 2Kool album 2Kool Flavor. She was featured on the track "Sambhala Hai Meine" and has since gone from strength to strength.
Mehta gave up her art studies course to pursue her dream of a singing career and teamed up with Rishi Rich to forum VR1, a band and production unit applauded for experimenting with traditional Asian music, remixing, and giving vocals an R'n'B twist. VR1 sold more than 50,000 records in the UK and Europe and earned two Asian Pop Media Awards.

After VR1, Mehta joined ePark / Urbanstar and released the single "Girls Gotta Have Fun", with both CDs having various mixes of the title track, as well as the song "Show me Love".
Mehta has recorded a few tracks with her new management record company 2Point9, "Indian Girl" featuring Hard Kaur, and the popular "U 'n' I (Mere Dil Vich Hai)", from the Yash Chopra film Hum Tum, a track that Veronica composed herself.

Mehta's first album, Theen, was released in 2005. 'Hey Ya' (featuring Juggy D.) was the only single released from the album.

Due to the succes of their action, Veronica could stay in business and is now one of the commercial Radio and TV - organisations from The Netherlands.

Someone To Hold (VLS)

No One But You (MCD)