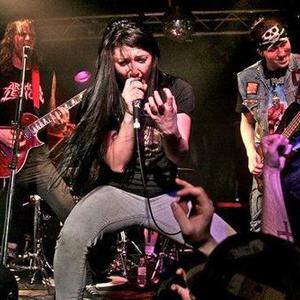 Unleash The Archers are a quintet that know how to melt faces. Their style of metal seamlessly combines death elements with power vocals, thrash riffs with breakdowns, blackened screams with the walking bass lines of British heavy metal. They've shared the stage with 3 Inches Of Blood, Dismember, The Faceless, Leaves Eyes, Blackguard, Stratovarius... The band is not confined to one genre, but instead strives to span them all. They play metal, plain and simple.

They've been ripping it up across Canada for the last five years and have built a huge coast-to-coast fanbase, and this summer they did a full North American tour, bringing their unique brand of heavy metal to the US and Mexican masses. Their enthusiasm on stage is contagious, their charisma is catching, and they bring an exciting live show every time they play, no matter where they are or who shows up. Brittney works the merch booth every night and is always down to chat, and the boys will be drinking at the bar right along side you (shots are very much appreciated ;). UTA are extremely hard working, they've always got a project on the go, whether it's new songs, a music video or new artwork to add to your t-shirt collection. Ever changing, never slowing down, they are driven by their immeasurable love of music, and united in their quest for success.

On July 26, 2012 Unleash The Archers released their third studio album titled ?Defy The Skies'. This being their first EP, they chose to release the record on 7? vinyl. The album consists of three fast-paced, fist-pumping anthems, which are a great example of the new direction the band is currently heading. Drums were recorded at Blue Wave Studios, guitars were recorded with Chris Holmes of Greenhouse Studios, and vocals were recorded at Crying Light Studios, and Harbourside Studios with Nick Engwer. Mixing and mastering was completed by Curtis Buckoll and Stu McKillop of Rain City Recorders. The artwork was completed by the talented JP Fournier (known previously for his work for Blind Guardian, Immortal, Dragonforce, etc;)

In May 2011 their sophomore album ?Demons Of The AstroWaste' was released to rave reviews and a massively positive reception. The subsequent tour across Canada was a roaring success, and included 40+ dates from Victoria BC all the way to Charlottetown PEI. This 12 track concept album was recorded at Vogville Studios and Harbourside Studios with Nick Engwer, and vocals were done at the Hive Soundlab with Stu McKillop of Rain City Recorders. Album artwork was again completed by JP Fournier (Blind Guardian, Immortal, Dragonforce, etc;)

In August 2009 Unleash The Archers released their first full studio album titled 'Behold The Devastation', recorded by Jason Martin of OmegaMediaCore Studios in Richmond BC. The album also features artwork by JP Fournier and is comprised of eight gripping tracks, all written over their first two years as a band.

Future plans for the band include another music video and a new album to be written this winter.