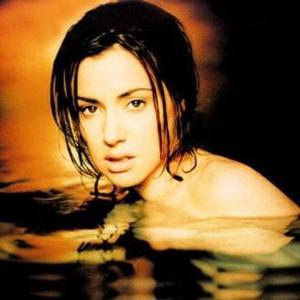 Tina Arena (born Filippina Lydia Arena on 1 November 1967, in Melbourne, Australia) is an Australian singer and songwriter. Her career began at the age of seven when she was selected as a regular performer for the music television program Young Talent Time. As a child Arena attracted attention for the power of her voice, which was considered remarkable for such a young child. She was born to Italian parents and has a sister, Nancy (born 1961). Often billed as "Tiny Tina Arena", she was seen on weekly television singing and dancing the current pop hits.

Her career began at the age of seven when she was selected as a regular performer for the music television program Young Talent Time. As a child Arena attracted attention for the power of her voice, which was considered remarkable for such a young child.

She was born to Italian parents and has a sister, Nancy (born 1961). Often billed as "Tiny Tina Arena", she was seen on weekly television singing and dancing the current pop hits. The show's policy was to promote talented children, and at the age of sixteen team members would leave, ostensibly to follow an adult career. As one of the show's youngest performers, Arena's nine year stint was also one of the show's longest. "Strong As Steel" Like most of the children who left the show, Arena carried with her a stigma that made it difficult to be taken seriously as an adult vocalist, and for a short time she contemplated ending her career, and found employment with an insurance company. She was invited to support Lionel Richie on his Australian tour, but despite this success and the profile it gave her, record companies were unwilling to offer her a recording contract. Arena persevered, playing nightclubs in Melbourne and in several stage musicals, before finally being offered a contract.

Her album Strong as Steel, released in 1990, contained one major hit single, the uptempo dance track, "I Need Your Body", whose accompanying video demonstrated Arena as a sexy and confident adult. The contrast between her adult image and that of the seven year old child she had been when she first became famous attracted considerable publicity in Australia, but some elements of the media insisted that she was little more than a novelty act. Despite the success of the further singles, The Machine's Breaking Down and the Diane Warren title track, the album failed to establish her as a major act, and she relocated to the United States.

After signing a contract with Sony Music, Arena released the album Don't Ask in 1994. It became one of the highest selling albums of the year in Australia and provided her with her first substantial hit single "Chains". The song also reached the Top 10 in the United Kingdom and Top 40 in the United States. Arena's career was said to be a priority of record executive Tommy Mottola who envisioned her achieving the level of success of C?line Dion or Mariah Carey, but the album failed to sell well in the US, and Mottola moved on to other projects. Other hits followed in Australia and Europe, including "Heaven Help My Heart", "Wasn't It Good" and "Sorrento Moon". The album won Arena five ARIA Awards for "Album of the Year", "Song of the Year" ("Chains"), "Pop Release of the Year" ("Chains") and "Best Female Vocalist", as well as a special award for "Highest Selling Female Artist in Australian History".

After more than twenty years she was finally accepted as a credible performer by both the record buying public and the Australian music industry.

Her next album In Deep (1997), produced by Foreigner's Mick Jones contained a cover version of their hit "I Want To Know What Love Is" (with backing vocals by the song's original vocalist Lou Gramm) and another major hit single "Burn". In Deep was the highest selling Australian album of the year. During this time she recorded the theme song for the film The Mask of Zorro, a duet with Marc Anthony titled "I Want To Spend My Lifetime Loving You". This song was highly successful in Europe, and Arena embraced European culture, recording several songs in French and relocating temporarily to France. During this period her greatest successes were these French recordings and they were major hits in France. A repackaged version of the In Deep album including the new French versions, and a cover version of the Edith Piaf song "Les Trois Cloches" was a major hit throughout Europe and reached number 3 in France.

Her 2001 album Just Me was a moderate success and included such hit singles as "Soul Mate #9", "Dare You To Be Happy" and "Symphony of Life". In 1998, Arena was invited to perform the role of Esmerelda in the West End production of Notre Dame de Paris in London. In 2000, she performed to the largest audience of her career at the Opening Ceremonies of the 2000 Summer Olympics in Sydney. Later that year she received an outstanding achievement ARIA Award for her career achievement, with the award also specifically recognising her success in France.

In 2003 she was recruited by Dance DJ Ray Roc to sing on his single "Never (Past Tense)". The song was one of the year's longest running hits on the Hot Dance Club Songs charet where it reached number one.

Arena completed her contract with Sony Music in the Fall of 2004, releasing a Greatest Hits album and a Greatest Hits DVD marking the end of her association with them. She was also released her Greatest Hits Live which features 90 minutes of LIVE concert footage recorded during her 2004 Greatest Hits tour in Australia.

After resigning a record deal with Columbia France, Arena recorded a new entirely French album, called Un Autre Univers (Another Universe). The album was co-written by Arena and an assortment of French and English writers and producers. The first single "Aimer jusqu'a l'impossible" (Love Till The Impossible) received airplay across French radio and debuted on the French national charts at #3. On November 17th 2005, Arena and partner Vincent Mancini became parents, with the birth of a son, Gabriel Joseph, in Paris.Arena's sixth studio album titled Songs of Love & Loss was recorded independently and self-financed as she no longer had a recording contract in Australia. The album was eventually released on 1 December 2007 after a new deal was struck with EMI Australia. The record was primarily made up of torch songs originally recorded by women in the 1960s and 70s such as Dusty Springfield and Diana Ross and the arrangements featured a full string orchestra conducted by Simon Hale. A promotional tour of Australia in early November included appearances on Dancing with the Stars and Sunrise. Five concert dates backed by a 35 piece orchestra were held in December?January: three at the Sydney Opera House and two at Melbourne's Hamer Hall. The album peaked at #3 on the ARIA Top Albums chart and was nominated for the ARIA Award for Best Selling Album.

While Arena was still promoting Songs of Love & Loss in Australia, her first French single in two years, "Entends-tu le monde?", was made available to French radio. The video was shot in and around Sydney during the promotional tour of her home country and went on heavy rotation on French music television channels upon its release. The song was the first single from her sophomore French album 7 vies which was released on 28 January 2008 and debuted at #12 on the official French charts, her highest debut ever in the country. The single "Entends-tu le monde?" was physically released on 11 February 2008 and debuted at #10 on the French charts, becoming her sixth top ten single there.

August 2008 saw Arena performing with Andrea Bocelli during his Australian tour. The two performed well received duets of "The Prayer", "Canto della Terra" and a cover of Elvis Presley's "Can't Help Falling in Love". Prior to the tour she had been in the UK recording her eighth studio album Songs of Love & Loss 2, which was released on 15 November 2008.[4] For this album, her vocals were recorded live with the London Studio Orchestra, again conducted by Hale.[5]


Arena & Alison Jiear at Sydney Mardi Gras 2009.Alongside fellow Australian singer and songwriter Darren Hayes, Arena appeared as a guest judge during the London auditions of Australian Idol's sixth season. The episode featuring Arena and Hayes aired on 27 August 2008. She again appeared as a guest judge on 16 November while she was in Australia to promote Songs of Love & Loss 2.

Arena has been awarded a Knighthood of the Order of National Merit, the second highest civil honour in France, by French President Nicolas Sarkozy in February 2009 for her contributions to French culture.

In March 2009, Arena toured Australia in support of her album Songs of Love & Loss 2 and also appeared as a surprise guest performer at the Sydney Gay & Lesbian Mardi Gras party singing a medley of "Aimer jusqu'? l'impossible" and "No More Tears (Enough Is Enough)" at 3 am accompanied by Alison Jiear on the latter.

2009 also saw the release of Arena's first French greatest hits album, The Best & le meilleur, and The Peel Me Sessions, an album of original material recorded in 2003 but rejected by her label at the time Sony.

A live CD and DVD was released in Australia in January 2010, The Onstage Collection, where the album peaked at #22 on the ARIA Charts.

Arena announced that she will release her seventh English studio album in 2011.