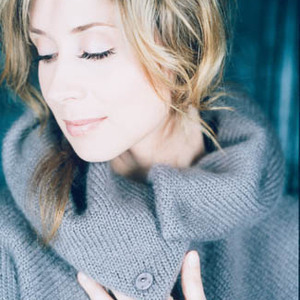 At the age of 14, the Belgian-Italian Lara Fabian was unknowingly setting the stage for an impressive international career by singing in Brussels's clubs. A few years later, after winning many European contests and gaining some popularity, she launched her first single, followed by her first self-titled album... Three years after the release of her first album, which went gold and platinum, she released her second album, Carpe Diem, which launched the career of this singer-songwriter in French-speaking countries, especially in Quebec.

Within three weeks, the album went gold. She then took her music on tour, performing to over 150,000 admirers, while her album went three times platinum. She was especially appreciated by the Canadian public and music industry. In 1995, she was awarded two F??lix awards by Quebec's association of recording artists (ADISQ), namely Best Female Vocalist of the year (by popular vote), and Best Live Performance of the year.
Then, things began to pick up!
In 1996, Walt Disney Studios immortalized Lara's voice. In addition to incarnating Esmeralda, the heroine of the animated feature The Hunchback of Notre Dame, she sang the theme song ("Que Dieu aide les exclus") on the film's soundtrack.
In October, her third album "Pure" went platinum in less than two weeks. Thanks to this album, she won the 1997 F?lix for Album of the Year. The same year, "Pure" was launched in France where over two million albums were sold within two years. Thanks to this resounding success, which eloquently expressed the affection of her loving and faithful fans, Lara was awarded the prize for New Artist of the Year at the prestigious French gala Les Victoires de la Musique. This was in February 1998, a few months before the concert tour in several French cities that led to the recording of an album (Lara Fabian Live) in March 1999 which went platinum a few months later. Lara Fabian was praised by music lovers and critics alike...
In addition to receiving the F?lix for Quebec Artist Having the Most Impact Outside Quebec, she was voted Personality of the Year by the magazine Paris Match, which featured her on its front cover. While her fame grew, she was honored at the World Music Awards for Best Selling Artist for "Pure". Between appearances in Europe, Lara often returned to New York City and San Francisco to record her first album in English. She wrote or co-wrote most of the songs, working with Rick Allison and producers Walter Afanasieff (Mariah Carey), Pat Leonard (Madonna), Sam Watters (ex-Color Me Badd) and Brian Rawling (Cher's "I Believe").
Produced by Sony Records, the self-titled album was launched in May 2000 on America's most popular morning television show, NBC's Today Show. Invitations poured in, and Lara Fabian appeared on The Tonight Show, The View, Access Hollywood, Craig Kilborn, Entertainment Tonight...
The album's first excerpt, I will Love Again, hit No. 1 on the Billboard Dance Music charts and settled in for 58 weeks! Thanks to this resounding success, she received the F?lix for Quebec Artist Having the Most Impact in a Language other than French. The songs on the album thrilled audiences worldwide.
In February 2001, Love By Grace became the theme song of the lead couple in the Brazilian soap opera La?os de Familia, broadcast by TV Globo for millions of viewers in Brazil and Portugal. For several weeks, the song was number 1 on most Brazilian and Portuguese radio stations. Love by Grace generated an incredible frenzy around the artist??? You just don't top the billboards of Portuguese speaking countries everyday!
After From Lara with Love, her first American TV special broadcast by PBS, the singer-songwriter participated in the very popular WTKU New York radio special, Miracle on 34th Street, where many popular artists appeared, including Michael Jackson, Christina Aguilera, Marc Anthony, Ricky Martin and Toni Braxton.
Shortly after, when her self-titled English-language album was released in Asia, Lara scored a number one hit on the Taiwanese top ten, a great moment for the artist. Many were particularly impressed with the song Light of my Life (found only on the Asian edition of the album), which she interpreted with Lee-Hom, Asia's top male Chinese-speaking vocalist. This song was included in the movie feature China Strike Force, starring newcomer Lee-Horn along with Aaron Kwok, a box-office idol throughout Asia.
Eagerly awaited in several cities throughout the world, Lara has brilliantly dealt with her growing popularity by frequently appearing abroad. The artist has performed in several European and American capitals, and has enjoyed every minute of her travels. Solid gold in Canada, Germany, Switzerland and Norway, Lara Fabian went platinum in Belgium, Brazil and France and triple platinum in Portugal. She enjoyed the longest number 1 run on Billboard's Heatseeker Chart in 2000.
Last May, Lara was awarded yet another prize at the World Music Awards in Monaco, where she sang Adagio. She also returned to New York and Los Angeles to lend her voice to the original soundtracks of two long-awaited international super productions in July 2001: She interpreted the song The Dreams Within, featured in the movie Final Fantasy: The Spirits Within, as well as For Always, the vocal version of the title song of A.I., Steven Spielberg's latest feature.
In addition to a new French-language album in September 2001, Lara Fabian launched the first single on her new album in May, "J'y crois encore", which can be heard on radio stations in Quebec and Europe.
From France to Brazil, in Italy, Belgium, Norway, Switzerland, Germany, Portugal, Japan and the United States, Lara Fabian has established her reputation as a determined singer-songwriter. Barely 10 years after the release of her first album, Lara has conquered the hearts of millions of fans throughout the world, whose fervor is equaled only by their affection for this talented and authentic artist. Eight million records sold worldwide to this day testify to her achievement.
Her best-selling European DVD and CD, En Toute Intimit?, released in October 2003, was an intimate, acoustic piano-based collection showcasing Ms. Fabian performing songs in English, Italian and French.
After En Toute Intimit? Lara Fabian released her 2nd English language album called "A wonderful life". Lara Fabian's latest release is an album in the French language with the title "Toutes Les Femmes en Moi", released in May 2009.