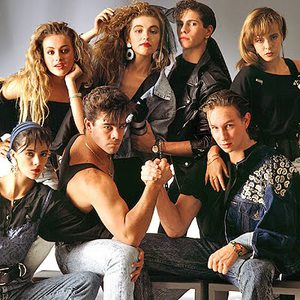 Timbiriche is the name of a Mexican group that debuted on April 30, 1982 during a broadcast of the news program Hoy Mismo with Guillermo Ochoa. Timbiriche included six children, most of whose parents were famous actors/singers/composers. Their names were Paulina Rubio, Sasha Sokol, Benny Ibarra, Diego Schoening, Mariana Garza, and Alix Bauer. Later on, Erick Rub?n would join the sextet. The name "Timbiriche" is the Spanish (Latin American Spanish) version of the game Dots and Boxes.

In 1985, the group starred in the teenage version of the stage production of Grease (Vaselina in Spanish), going on tour to major cities in Mexico.

By 1986, when they were all teenagers, the band's fame was almost at its highest. Thal&iacute;a replaces Sasha and Eduardo Capetillo replaces Benny Ibarra, but they continue to succeed. Sasha's leaving of the group was very hard for the fans to accept as she was one of the favorites, and Thalia had a lot to live up to.

Other famous replacements for the original members of the group were Bibi Gaytan and Edith M?rquez. Diego Schoening was the only one to never leave the group.

In 1990, the album 10 was released with the same success as the previous album.

In 1992, most of the members left the group and where replaced with new ones. They released 11. Surprisingly, the group managed to maintain its popularity. The final album released was 12. After that album, the group officially ended.

In 1998, the original group reunited for the Mexican summer show Acapulco '98. With the success of the reunion show, a 4-night engagement was booked at the National Auditorium in Mexico City. The 10,000 seat auditorium sold out quickly, generating the need for at least 16 shows. In the end, the group performed a total of 20 shows, breaking the record of 17 shows previously set by Luis Miguel at the venue. Later, they went on a national tour, from which came a live double album and three new songs, "Est? Despierto," "Suma C?smica," and "La Fuerza del Amor." "Est? Despierto" was released as a single.

2007 marks the 25th Anniversary of Timbiriche. With this in Mind Timbiriche will tour Mexico and the USA, calling their tour "Timbiriche 25". Scheduled are 20 dates in Mexico y 10 in USA. The participants of this tour will be the 6 Timbiriche origianls: Sasha Sokol, Benny Ibarra, Diego Schoening, Mariana Garza, Alix Bauer, Erick Rub?n.

The group appeared for the first time the 30 of April of 1982 in the popular program of televis??n "Siempre en DomingO" led by Raul Velasco, sponsored by the musical producer Luis de Llano and the outstanding Spanish singer Miguel Bos?.

That same year they released their first disc "TIMBIRICHE" with six members Alix, Benny, Diego, Mariana, Paulina and Sasha that gained the heart of mexican children immediately and just a year later they send to its second LP "Banda Timbiriche" and later "Banda Timbiriche en Concierto".

That same year Erick joins the group and send to a new disc "Ruido". Time later the seven small ones mount the play "Grease" and put out the album "Grease WITH TIMBIRICHE".

For 1986 the evolution begins, and the old children's group gives rise to a new sound but fresh and directed to an adolescent public.

"TIMBIRICHE ROCK SHOW" is released and immediately reaches number one in sales; in this album, several songs stand out that with time became classic like: Soy Un Desastre", "Corro, Vuelo Me Acelero".

For 1987 they released "TIMBIRICHE 7" with 2 new members then Benny leaves the group to continue with his studies and Sasha to make a carreer as a solist. Their place was taken by Eduardo and Thalia. With "7 TIMBIRICHE" the group increases their success and they consolidate as a youth group. From this album hits came off like: Rompecabezas, Besos de Ceniza, Con Todos Menos Conmigo.

Around 1988 Mariana leaves the group to work as actress and enters Edith.

"TIMBIRICHE XVIII leaves the album on sale and IX" this disc without a doubt mark the culminating point in the musical race of the group. Songs like: Amame Hasta Con los dientes ,and Tu Y Yo Somos Uno Mismo, marked an era.

For 1990 he leaves "TIMBIRICHE 10" not without before taking step to a album of hits recorded with the Symphonic Orchestra of Mexico City : "the Classic ones of Timbiriche".

"TIMBIRICHE 10" is considered by many like the last album that conserves the original style of the band, that at the moment counted already single with three of the original members (Paulina, Diego and Erick) and Edith, to them Claudia, Bibi added themselves and Patty (that despues of single months in the group would be replaced by Silvia) then Eduardo, Thalia and Alix leave the group to prepare themselves like solits. For these heights, the group no longer was as united as before and in the concerts or interviews it almost always lacked some member.

Although the good disc profit sales and I include hits as Princess Tibetana and ME Pongo Mal. But in 1991 the band returns with 6 new members (Tannya, Kenya, Alexa, Lorena, Mano and Jean) Diego as only the original one and enters records "TIMBIRICHE 11" and is presented/displayed in a special program of "Siempre en Domingo"

In spite of conserving the name and the concept in general, there were a new musical style that mixed dances and tropical rates. Although "TIMBIRICHE 11" was not very popular between fans, for 1992 they record "12 TIMBIRICHE" disc of which was given off the one that was considered like last hit of the grouping: Muriendo Lento.

But the group was lost its enchantment and finally it disintegrate in the middle of 1994. In 1998 the encounter with the original members of the festival ACAPULCO 98 occurs within the framework (without Erick). This encounter generated commotion between the followers who asked a tour.

For 1999 the tour is reality was developed by all Mexico and part of Latin America and included the seven original members. This Tour established in the National Audience of the City of Mexico a record of hearing with but of 20 consecutive concerts and him a new disc "TIMBIRICHE was come off the CONCERT" that was recorded live in the National Audience day 20 of December of 1999 which I include three new themes. At the end of the 1999 the group returns to disintegrate itself apparently definitively.

In the recording of the disc Timbiriche 11 participated: Silvia, Lorena, Alexa, Tanya, Kenya, Mano and Diego, but for the official presentation occur to know Jean instead of Kenya, since she the group spontaneusly to prepare its career as solist giving foot to not being well-known officially like member of Timbiriche.