Tilly And The Wall 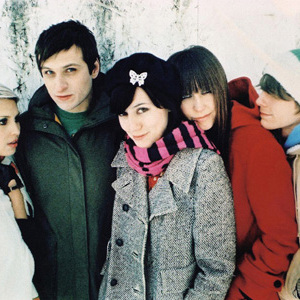 Tilly and the Wall are an indie rock group which formed in Omaha, Nebraska, United States in 2001. The band consits of Derek Pressnall (vocals, guitar), his wife Jamie Pressnall (tap dancer), Neely Jenkins (vocals, bass), Kianna Alarid (vocals, recorder, bass) and Nick White (keyboards). The band has gained notoriety for having a tap dancer provide percussion instead of a drummer (although drums and drum machines are occasionally used on some of their recordings, and Pressnall is usually complemented by Alarid and Jenkins stomping on the floor).

To date they have recorded four albums: Wild Like Children, Bottoms of Barrels, O and Heavy Mood.

Tilly and the Wall sprang out of Omaha in 2001 - a Midwestern band of like-minded friends with pockets full of melodies, and a lot of pockets. The serendipitous result of five Omaha residents with a penchant for the same classic '60s pop, boy/girl harmonies and Americana folk records, Tilly and the Wall celebrates the petulant, determined, feisty nature of youth. They rejoice in tales of dreams followed, mistakes made, and hearts broken.

Tilly and the Wall released their debut album, Wild Like Children, in June 2004 on Conor Oberst's label, team love. Neely and Jamie were once in a band with Conor before he became known worldwide as Bright Eyes. Derek and Nick moved to Omaha from Atlanta, Georgia. Upon meeting, it was as if long-lost friends had found each other: without a doubt, the Tillys were born. Once the songs were written, Conor agreed to helm the production duties, and hence, Wild Like Children was unleashed on the world. As one of the first albums released on team love, Tilly and the Wall set a precedent for the label's identity: original, smart, exciting and, above all, easy to sing along to. The record consisted of 11 perfectly formed songs bursting with enthusiastic hyperactivity, while emanating a bitter sweet melancholy of long lost summers and misguided first loves. In front of a backdrop of sunshine, rain and snow, Tilly and the Wall sang songs about loving and kissing, dancing and drinking, staying and leaving, driving and talking, sleeping and dreaming, all set to the tap-tap-tapping of Jamie's toes. The press from sea to shining sea fell in love instantly.

And so, the Tillys went to meet their adoring fans, playing shows throughout America with the likes of Bright Eyes, Rilo Kiley, The Go! Team, Pedro the Lion, of Montreal and more. When not on the road, the band began working on the follow-up to Wild Like Children, simply titled Bottoms of Barrels. Recorded over three weeks in October and November 2005, the album was recorded by AJ Mogis, brother and mixed by studio co-hort to Bright Eyes' Mike Mogis. Bottoms of Barrels sees the Tillys taking their signature sound to the next level. The choruses are more rousing, the tapping more intense, the instrumentation fuller, each sound painting broad brush strokes across your speakers. Longtime friend Nate Walcott contributes a bit of trumpet, while other friends have added drums, accordion and cello. A couple of tracks even feature the vocal styling of University of Nebraska's own choir Trip The Light Fantastic, bolstering Neely and Kianna's dulcet harmonies. Bottoms of Barrels fully demonstrated the importance of Tilly's ?we? perspective ? with a gang full of voices, the band made strong declarations about love, freedom and their own place in the world. The album took the band on travels they had only dreamt about, resulting in extensive tours throughout Europe, Australia, Japan and even Iceland. They also played their first-ever sets at major music festivals, including the Reading/Leeds Festival, Coachella and Japan's Summer Sonic. By the middle of 2007, they returned home to Omaha to begin work on their next long-playing record, having amassed legions of fans, as well as frequent flyer miles, across the entire globe.

Their new record, which has no title but is represented by the shape o (the cut-out shape framing the handmade cover artwork for the record), was produced by acclaimed producer Mike Mogis through the harsh Nebraska winter of 2007. o sees Tilly and the Wall redefining their sound, taking bigger, bolder steps towards experimentation while maintaining the elements that have always made them who they are. o draws on everything from nature to magic, from sex to astrology, with a larger focus on percussion, rhythm, harmonies and kaleidoscopic melodies, yet ultimately still sounds like our five musical friends from Omaha.