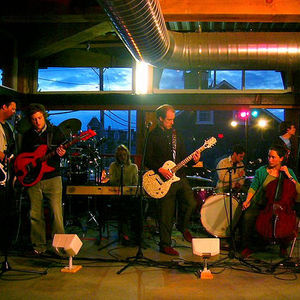 Tiger Saw is a musical collective founded in Newburyport, MA in 1999 by Dylan Metrano. It is an ever-changing group of friends, whose ranks can vary to form a hushed duet or fifteen-person orchestra incorporating piano, cello, horns, percussion, and a small choir. Their simple, heartfelt songs celebrate friendship, community, the beauty of everyday life, and love in all its forms. Tiger Saw has toured extensively in North America and Europe, and is known for playing unorthodox venues from beach bonfires to treetop sing-alongs, as well as basements and barrooms from coast to coast.

Since 2002, Tiger Saw has released four albums on Kimchee and Tract Records, and has performed with Grizzly Bear, Kimya Dawson, Jens Lekman, Jad Fair, Laura Veirs, Magnolia Electric Co., Explosions in the Sky, The Gossip, and many others.

Tiger Saw is recording it's fifth album, Paper Birdz, this autumn with engineer Djim Reynolds in Leominster, MA - birthplace of Johnny Appleseed. The record finds them further exploring the "basement soul" sound that they first hinted at with Tigers on Fire. The songs on Paper Birdz are meditations on blood, birds, and transformation, and feature re-workings of the spiritual 'Sinner Man' (popularized by Nina Simone and the Wailers) and Pharoah Sanders' 'Japan', a Tiger Saw live staple. Among the players on the album are the rapper Cathy Cathodic, and members of the bands Victory at Sea, Harry and the Potters, Seekonk and others. Committed to expanding the possibilities of their live performances, Tiger Saw's ranks now include a tap-dancer, a magician, and an eight-piece horn section.