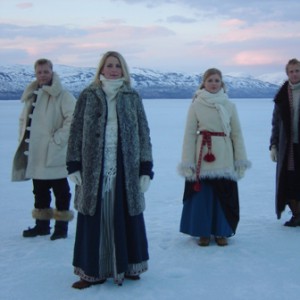 The Real Group is a Swedish vocal group, consisting of five members; Emma Nilsdotter (who replaced Margarita Bengston after her departure for solo career), Katarina Henryson, Anders Edenroth, Anders Jalk?us and Morten Vinther S?rensen (who replaced Peder Karlsson after his departure in order to teach). The quintette was formed in 1984 and has today performed at more than 2000 concerts worldwide and released more than 10 CDs. The members sing a cappella and write most of their songs or arrangements themselves and also many of their lyrics.

Margareta and Anders Jalk?us used to be married to each other, but are now divorced.

Bobby McFerrin has been a major source of inspiration for them.

Vocal ranges of the members:

In The Middle Of Life