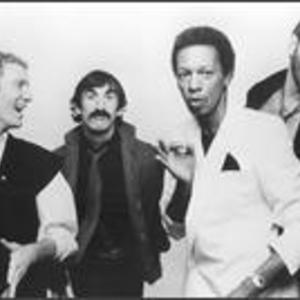 The Nylons are an a cappella group founded in 1978 in Toronto, Ontario, Canada, best known for their covers of The Turtles' "Happy Together", Steam's "Na Na Hey Hey Kiss Him Goodbye", and The Tokens' version of the traditional "The Lion Sleeps Tonight". The origins of the Nylons date back to 1978 when four experienced Toronto stage actors, Connors, Cooper, Morrison, and Simpson, used to get together in the back of a delicatessen to sing doo-wop together.

The origins of the Nylons date back to 1978 when four experienced Toronto stage actors, Connors, Cooper, Morrison, and Simpson, used to get together in the back of a delicatessen to sing doo-wop together. They took their ensemble to parties and friend's houses and constant comments from people convinced them to take their unique a cappella act into the clubs. An acquaintence met at a party was about to open a new cabaret and invited them to debut there. They played there for six weeks, garnering rave critical and audience reviews. In 1979 Simpson retired from the group and Cole was brought on board. They very quickly established themselves as one of the area's classiest and most original ensembles and caught the attention of Attic Records. Their first album eventually went platinum in Canada (100,000 copies), and there followed four more releases on Attic that all sold at least gold in Canada (50,000 copies). They received the equivalent of a Dutch Grammy award and a gold disc for the One Size Fits All album and the Best Singer Award at 1986's Tokyo Music Festival. In 1987 Disney used their song That Kind Of Man in their feature The Tin Man, and their version of Up The Ladder To The Roof was used in the movie Made In Heaven. They also scored a second appearance on the Taft Broadcasting television show Throb after writing the theme song and a previous appearance on the program. In February 1991 founding member Connors left the group and in March of that year died of viral pneumonia. A new deal in 1991 with Scotti Brothers in the US and BMG in Canada saw the release of three more albums, and constant touring on either side of the border. Over the years various member changes have led to today's lineup of Morrison, Robinson, Mosbaugh, and Cassius. In 1997 they signed with Shoreline Records in the US, a label primarily devoted to vocal groups, and released the Fabric Of Life. Today they continue to tour the world to audience and critical acclaim.

The Best Of The Nylons

One Size Fits All (Vinyl)