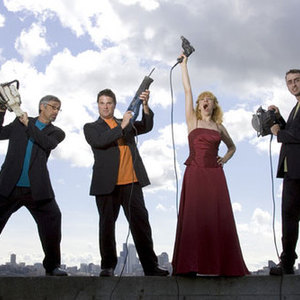 A Capella, A Cappella, California, Silly

The Bobs are a "new wave" a cappella group founded in San Francisco, California. The group is known for humorous original songs and avant-garde arrangement techniques. Instead of covering more traditional doo-wop songs, The Bobs started out with songs like "Helter Skelter" (The Beatles) and "Psycho Killer" (Talking Heads). Although two of their albums are dominated by covers, the overwhelming majority of their repertoire is original...

The Bobs have broken with a cappella tradition several times by including instruments. The majority of the 1995 album Plugged is backed by toy drums. Plugged also made heavy use of studio equipment to make the voices sound more like guitars and bass guitars. Coaster includes a rock rhythm section on one song. But this original "band without instruments" usually uses just their mouths, hands, feet and "other body parts" to fill a room with a sound as big as an orchestra.

Members of the group are always credited with "Bob" as their middle name. The name is often described as an acronym for "Best of Breed," an award given out at dog shows.

The group has garnered a healthy cult following in the U.S. and Europe in the 24 years they've been touring and recording, and has won numerous songwriting and vocal performance honors.

...Songs at any Speed

Get your Monkey off my Dog