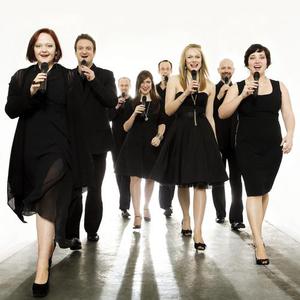 The Swingle Singers, currently based in London, are an international a cappella phenomenon whose history dates back to 1962. For over four decades, the unmistakable sound of "Swingle singing" has defined the art form: virtuosic vocal agility and blend demonstrated by their signature close-microphone technique, combined with high-level entertainment that has thrilled audiences around the globe. The latest lineup of young and talented voices represents the group's transformation from pioneering classical/jazz crossover artists to contemporary vocal super-group.

Their repertoire encompasses classical, jazz, latin, pop and rock, all accompanied by their own vocal rhythm section. The Swingle Singers have performed all across the UK, America, Asia, and virtually every country in Europe, have released over 50 recordings, and have won five Grammy Awards.

* Richard Eteson recently announced his departure from the group.

The group, directed primarily by the eponymous Ward Swingle and accompanied by bass and drums, produced complicated, technically impressive covers of anything from modern classics (The Beatles) to classical music (Tchaikovsky, Beethoven) to opera (Rossini). Their arrangements are often informed by jazz harmonies and stylings. Other influences included Nat King Cole, various smooth singers and pianists.

The Swingle Singers were active in classical music. A 'hit' for them was Bach's 'Air On The G String', recorded with the Modern Jazz Quartet. Luciano Berio wrote his postmodern symphony Sinfonia for eight voices and orchestra with them in mind.

The original group disbanded in 1973 but has reformed several times since, using different names but continuing Ward Swingle's tradition of jazz-infused arrangements and extreme technical proficiency. The most current incarnation of the group is once again called The Swingle Singers.

Beauty And The Beatbox

Anyone For Mozart, Bach, Handel, Vivaldi?