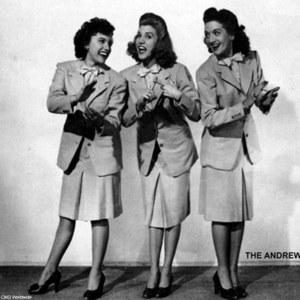 The Andrews Sisters were a group of singing sisters: LaVerne Andrews (contralto; July 6, 1911-May 8, 1967), Maxene Anglyn Andrews (high harmony; January 3, 1916-October 21, 1995) and Patti Andrews (lead; born February 16, 1918). All were born in Minnesota to a Greek immigrant father and a Norwegian American mother. ?Patty Andrews, the lead singer of the Andrews sisters group was born in Mound, Minnesota on February 16, 1918 in a house that occupied the property where The Gillespie Center stands today.

?Patty Andrews, the lead singer of the Andrews sisters group was born in Mound, Minnesota on February 16, 1918 in a house that occupied the property where The Gillespie Center stands today.

During the 1920's Laverne, Maxene and Patty Andrews spent their summers in Mound, living with their parents in a house across the street from the grocery store that was owned by Pete and Ed Sollie, bachelor uncles of the three girls. (Today, Green T Accounting occupies the Sollie grocery store building and The Gillespie Center is on the land where the Andrews Sisters' house once stood.)? - From a commentary by Tom Rockvam that appeared in The Laker Newspaper during 2005.

They started their career as imitators of an earlier successful singing group, the Boswell Sisters. After singing with various dance bands and touring on Vaudeville, they first came to national attention with their recordings and radio broadcasts in 1937. Their music entertained Allied troops worldwide during World War II, sold war bonds, appeared in several films (including a few Abbott and Costello features), and performed for soldiers serving overseas. Their first film with Abbott and Costello, the pre-war comedy Buck Privates, introduced their best-known recording, "Boogie Woogie Bugle Boy" which would win Best Song at the Academy Awards.

They also recorded many songs with Bing Crosby. Their popularity was such that after the war they discovered that some of their records had actually been smuggled into Germany after the labels had been changed to read "Hitler's Marching Songs."

After a brief hiatus after the war, the sisters regrouped, performing in clubs throughout the United States and Europe. They broke up in 1953, with Patti's choice to go solo. Their last appearance together was in 1962 on The Dean Martin Show. Laverne, who had cancer, retired soon after; she died five years later, in 1967 at the age of 55.

After a long silence, the two surviving sisters had something of a comeback when Bette Midler recorded a cover of their song "Boogie Woogie Bugle Boy." Maxene and Patti appeared both together and separately throughout the 1970s, with Maxene releasing a solo album in 1986. Their most notable comeback; however, was in the Sherman Brothers' nostalgic World War II musical: Over Here! which premiered on Broadway at the Shubert Theatre in 1974. The musical featured the two then living sisters (Maxene and Patti) and was written with them in mind for the leads. It launched the careers of many, now notable theater and film icons (John Travolta, Marilu Henner, Ann Reinking, et al). Ironically it was the last major hurrah of the sisters and was cut short due to a frivolous lawsuit initiated by Patti's husband to the show's producers.

Throughout their long career, the sisters had sold over 60 million records. The group was inducted into the Vocal Group Hall of Fame in 1998. By the end of Maxene's life in 1995 she was reportedly estranged from her younger sister, Patti, the now sole surviving Andrews sister.

LaVerne and Maxene Andrews are interred in the Forest Lawn Memorial Park Cemetery in Glendale, California.

The Andrews Sisters recording of "Don't Sit under the Apple Tree" was sampled in Soul Coughing's song, "Down to This"; off their album Ruby Vroom.

You go to my head 06-Andrews S

The Golden Age Of The Andrews Sisters CD4

The Golden Age Of The Andrews Sisters CD3

The Golden Age Of The Andrews Sisters CD2

The Golden Age Of The Andrews Sisters CD1