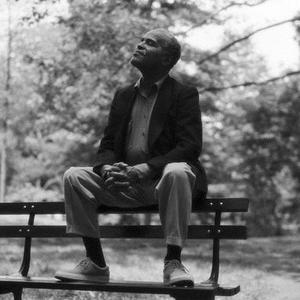 Born in 1921 in Newark, Ohio, young Jon and his fourteen siblings were moved many times, following their father's assignments as an A.M.E. pastor, before settling permanently in Toledo. As a teenager, Jon's first interest was in the drums, but before long he was singing on the radio regularly with another Toledo native, the extraordinary pianist Art Tatum. After serving in the Army during World War II, Jon went home to attend University of Toledo as a Pre-law major, courtesy of the G.I. Bill. Just when he was about to enter the graduate law program, the G.

After serving in the Army during World War II, Jon went home to attend University of Toledo as a Pre-law major, courtesy of the G.I. Bill. Just when he was about to enter the graduate law program, the G.I. benefits ran out, and he realized he'd have to chart a different course. Recalling that Charlie Parker had, at a stop in Toledo two years prior, encouraged him to come to New York and look him up, Hendricks moved there and began his singing career.

In 1957 he teamed with Dave Lambert and Annie Ross to form the legendary vocal trio Lambert, Hendricks & Ross. With Jon as lyricist, the trio perfected the art of vocalese and took it around the world, earning them the designation of the "Number One Vocal Group in the World" for five years in a row from Melody Maker magazine. After six years the trio disbanded for solo careers, but not before leaving behind a catalog of legendary recordings, most of which have never gone out of print. Countless singers cite the work of LH&R as an influence, from The Manhattan Transfer to Al Jarreau to Bobby McFerrin.

Pursuing a solo career, Hendricks moved his young family to London in 1968, partially so that his five children could receive a better education. While based in London, he toured Europe and Africa, performed frequently on British television, and appeared in the British film Jazz Is Our Religion and the French film Hommage a Cole Porter. His sold-out club dates drew fans such as the Rolling Stones and the Beatles. Five years later the Hendricks family settled in California, where Jon worked as the jazz critic for the San Francisco Chronicle and taught classes at California State University at Sonoma and the University of California at Berkeley. A piece he wrote specifically for the stage about the history of jazz, Evolution of the Blues, ran an unprecedented five years at the Broadway Theatre in San Francisco and another year in Los Angeles. His television documentary, Somewhere to Lay My Weary Head, received Emmy, Iris, and Peabody awards.