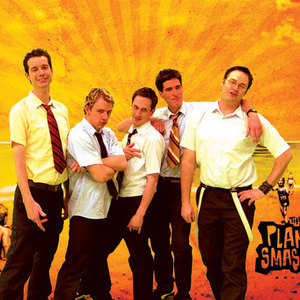 Formed in 1994 in Montreal, Quebec, the Planet Smashers' infectious pop infused melodies, rippin' horn licks and killer live shows, quickly established them as the city's ?Kings of Ska?. They released their first album (?Self-Titled?) on Planet Smasher's founder Matt Collyer's own label Stomp Records and hit the road. By 1997 they were no longer a local band, but a national phenomenon, headlining shows across Canada and pushing their second record, ?Atttack of The Planet Smashers? which reached 2 on the national college radio charts for 2 months straight.

Their third album ?Life of The Party? took the continent by storm, ?Life of the Party?, The Planet Smashers won the Montreal Independent Music Award for best ska band and drew attention from major labels, bands, publishers and booking agents all over the world.

Although the band received much commercial attention during the ska wave, they decided to continue down the independent road with STOMP Records, which had become and remains a major player in the international independent music scene. Their fourth release, ?No Self Control? (2001) was produced by Steven Drake (Tragically Hip, Barenaked Ladies, The Odds etc.) and was also well received by national college radio and spawned hit videos such as the animated ?Blind? and the tongue in cheek ?Wish I Were American?.

?Mighty?, the Planet Smashers' fifth full length, was produced/engineered by Rod Shearer (Bran Van 3000, Bionic, Corey Hart) and co-produced by The Planet Smashers (not to mention mixed on the same board as Madonna's ?Like a Virgin?!). Having moved past the dark and critical themes of ?No Self Control?, ?Mighty? became the band's most success record internationally after being licensed by labels in Japan, Europe, Russia, Brazil and Australia.
The Planet Smashers released their first and only DVD ?10? in 2004, commemorating the last 10 years of the band. Countless tours all over the world, 12 videos, 5 full length releases and a ton of good times. The Planet Smashers celebrated their 10th by joining the Vans Warped 2004 which also entered it's 10th year. In 2005, the Smashers released ?Unstoppable? their sixth and most recent commercial offering. The album was licensed in Japan by Sky/Sony, in the UK by Household Name Records/Plastic Head, in Europe by Leechredda/Cargo and in Russia by AudioFind. In 2006 the band played over 60 shows in Europe including Moscow, London, Vienna, Berlin, Zurich, Amsterdam, Dublin and many more.

In terms of touring, not many indie Canadian bands come close. They have headlined countless tours in North America, 8 European tours, been included on 5 Vans Warped Tour as well as a Japanese tour in 2002. They have toured with such acts as AFI, the Toasters, Sick of it All, Billy Talent, Rancid, Mustard Plug, Simple Plan, Samiam, The Aquabats, Mighty Mighty Bosstones and countless others.

Descent Into The Valley Of...

Life Of The Party

Attack Of The Planet Smashers