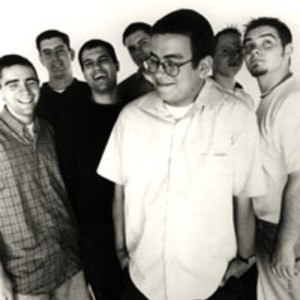 A 1990's ska band from Long Island, Edna's Goldfish enjoyed nationwide popularity although the band only lasted for a few years (1997-1999). Their studio albums include Before You Knew Better (1998) and The Elements of Transition (1999), both released on Moon Ska Records, on which one can find such hits as Veronica Sawyer and Everyone I Know Is from Lindenhurst. The video for "Veronica Sawyer" received some airplay on MTV, on their seminal TV show 120 Minutes.

The band toured from 1997 to 2000 with a variety of bands including Slow Gherkin, The Toasters, Catch 22, Mustard Plug, Animal Chin, Siren Six!, The Pilfers, Reel Big Fish, Less Than Jake, and many others. After their 2000 tour with Rx Bandits and The Gadjits the band decided to disband to pursue other interests. Singer Brian Diaz went on to form The Reunion Show with ex-members of Step Lively. Trombonist Ian McKenzie can still be seen playing with Catch 22.

The Elements Of Transition

Before You Knew Better...