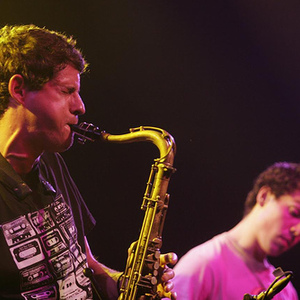 Using the rich musical landscapes of Boulder and Denver Colorado as their muse, The Motet has mastered the delicate task of constantly reinventing their sound while staying true to their various roots. Founded in 1998 by Dave Watts, The Motet has become one of the best improvisational bands touring . Their ability to seamlessly fuse elements of afro-beat, electronica, funk, and jazz has led to a sound that defies categorization.

The Motet is a world-class ensemble that whips audiences into a whirling frenzy using sheer impromptu force. With their spontaneous and textured rhythms and hard-driving beats, the band creates a repertoire between themselves and the audiences that is rarely seen in today's manufactured rock. The Motet consecrates the ground on which dance music meets free-form improvisation, allowing a diverse audience to become immersed in their eclectic sound. "Our tendency to avoid being pigeon-holed is a reflection of who we are as musicians," said Watts. "We try to be open-minded about how we approach different genres and traditions."

With its 6th release, Dig Deep, The Motet once again proves that it is a group
committed to exploring and pushing the sonic envelope, while still remaining committed
to the musical traditions that have defined their sound. A heavy-horned afrobeat
influence countered with a textural blanket of electronica, this album showcases the
talents and strengths of the cast of characters that drummer and producer Dave Watts has
assembled. Keyboardist Joey Porter lays down the funk under the coursing melodies of
saxophonist Dominic Lalli in pure Motet fashion, with the ever-driving beats of Watts'
masterful rhythmic production pushing the music through sonic peaks and valleys that
tantalize and invigorate listeners. If you've loved The Motet for years or are just tuning
in, listen up. You won't be disappointed.
The Motet is known for its revolving musicians and a breadth of musical influences,
and Dig Deep plays to the strengths of many former and current members. Bassists
Garrett Sayers and Paul McDaniel both shine brilliantly on Dig Deep, adding the sonic
drive that is characteristic of The Motet's sound, which has steadily morphed and evolved
over the last ten years. Sayers' bass solo on ?Guru' is a perfect example of his technical
virtuosity, and with this, Watts as a producer has captured a quintessential Motet
moment. The title track ?Dig Deep' showcases another side of The Motet low-end,
heavy-bass sound, with McDaniel laying down raw grooves in an open section that is
peppered with Watts' sonic explorations.
Longtime fans of The Motet will be happy to hear Jans Ingber's voice on ?Push,' a
track that was born from an improvisational moment during the band's New Years 2009
show. Last featured on The Motet's 2000 release Play, Beth Quist's soaring vocals are
highlighted on the Fela Kuti track ?Kalakuta Show' and the tune ?The Luxury of Doubt,'
a collaborative effort with Watts. Throughout Dig Deep, percussionist Scott
Messersmith adds his signature textural rhythms, anchoring the evolutionary sound of the
band in its Afro-Cuban and West African roots. His contributions are particularly salient
in the afrobeat tunes ?Mighty' and ?Roforofo Fight.? Guitarists Mike Tiernan and
Zivanni Masango both add their talents on Dig Deep, as do Danny Sears on trumpet and
John Stuart on baritone saxophone.
With this mix of talented musicians contributing to the album, it is no wonder that Dig
Deep sounds as good as it does. But at the helm is drummer Dave Watts, simultaneously
embodying the roles of bandleader, musician, composer, and producer. It is Watts'
creative imagination that drives Dig Deep, mixing recorded and sampled tracks that
seamlessly carry the music forward throughout the album. As a drummer, Watts has
been called ?the human metronome.? His sense of timing and polyrhythmic
understanding is what has made him a force in the live music scene for over twenty years.
Dig Deep is his most in-depth exploration into production work thus far. Watts has
amply represented the layered electronica-funk vibe that has begun to characterize The
Motet's sound over the last few years, and he has truly ?dug deep? to bring you Dig
Deep.
Dig Deep is available for FREE DOWNLOAD at myspace.com/themotetmusic