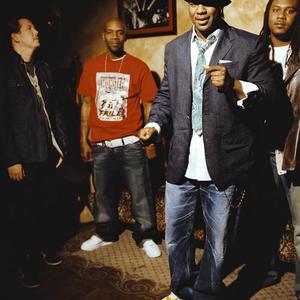 Robert Randolph & The Family Band is a multicultural American blues and funk band composed of Robert Randolph, Marcus Randolph (drums), Danyel Morgan (bass), and Jason Crosby (organ). Frontman Robert Randolph was trained as a pedal steel guitarist in the House of God Church, Keith Dominion, in Nashville, TN and makes prominent use of the instrument in the band's music. The group's sound is inspired by successful 1970s funk bands such as Earth, Wind & Fire and Sly & the Family Stone, another multicultural band comprised of former members of the Church of God in Christ.

Randolph himself has also stated that his main influence as a guitarist is Stevie Ray Vaughan.

Although he has only put out two albums, Rolling Stone magazine named Randolph as one of the 100 greatest guitar players of all time.

Robert Randolph set the music world on fire in late 2000 and early 2001 when he began to play his first club dates in New York City. These were a result of being discovered playing his pedal steel guitar at the first Sacred Steel Convention in Florida in the spring of 2000. Randolph started playing the pedal steel as a teenager and started playing at his Orange, NJ, church just outside of Newark. The House of God Church, an African-American Pentecostal denomination, has been implementing steel guitars (or "Sacred Steel") in services since the '30s, with the pedal steel in particular being introduced during the '70s. Randolph learned to play by watching other steel players in his church. Jim Markel was the man who heard Randolph play at the Sacred Steel Convention, and he later introduced him to his friend, Gary Waldman. Waldman, who already managed several artists, invited Randolph to audition for him. Waldman and Markel began to manage Randolph; they played the audition tape over the phone to Matt Hickey, talent buyer at Manhattan's Bowery Ballroom. Hickey signed Randolph on as the opening act for the North Mississippi Allstars and it was the beginning of a very large explosion. Within a month, Randolph was playing to thousands with Medeski, Martin & Wood (MMW) at the Beacon Theater. Allstars and MMW keyboardist John Medeski liked Randolph so much that he asked him to record an all-instrumental gospel/blues album with them. The Word was released in August 2001 to great critical and popular acclaim. Randolph's own band, the Family Band, includes cousins Danyell Morgan and Marcus Randolph (bass and drums, respectively) and John Ginty (Hammond B-3 organ). Their career began with opening gigs for a variety of blues, jazz-funk, and jam bands such as the Derek Trucks Band, Karl Denson's Tiny Universe, and Soulive. Headlining gigs became the norm within a few months. Robert Randolph & the Family Band released Live at the Wetlands in fall 2001. 2003's Unclassified and its single, "I Need More Love," introduced Randolph to an even wider audience. Colorblind followed in 2006

Live at the Wetlands