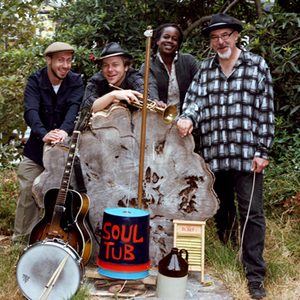 Formed in November 2007, The California Honeydrops first performed on the streets and in the subways stations in Oakland, California. Playfully crossing genres from Roots and Blues to R&B and soul, The California Honeydrops' sound is tied together by soulful vocal harmonies, colorful shouts from brass and horns, and a funky, good-times New Orleans rhythm section. They quickly gained a reputation as the best party in the Bay Area.

Born in Warsaw, Poland, band leader and front man Lech Wierzynski began playing blues and jazz as a teenager at after-hours jam sessions in Washington D.C. After studying trumpet with Marcus Belgrave (Ray Charles), Lech continued his career after moving to Oakland. Honing his craft with some of the biggest names in American music, such as Maria Muldaur, Dan Hicks, and Jackie Payne, Lech has grown equally as a trumpeter, singer, and guitarist.