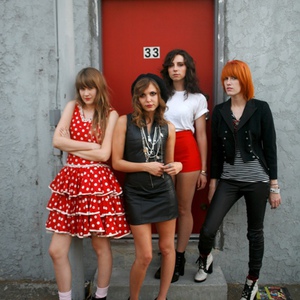 The Like are an indie rock band which formed in 2001 in Los Angeles, California, United States. The band consists of Elizabeth "Z" Berg (vocals, guitar), Laena Geronimo (bass), Annie Monroe (organ) and Tennessee Thomas (drums). Bassist Charlotte Froom left the band in 2009 and was replaced by Geronimo. Reni Lane, who joined shortly after Froom left, departed the band sometime in late 2009 or early 2010 and was replaced by Monroe. Berg is the daughter of Geffen A&R rep Tony Berg and Thomas is the daughter of Pete Thomas, the drummer for Elvis Costello & The Attractions.

The name of the band comes from the girls tendency to frequently use the word ?like? in the style of the valley girls of LA. The band has released two albums, "Are You Thinking What I'm Thinking?" (2005) and "Release Me" (2010).

Over a period of three years, the band independently released three EPs (I Like The Like, ?and The Like, and Like It or Not), which they sold at shows and on their website. Their song ?(So I'll Sit Here) Waiting? was featured on the soundtrack of the film Thirteen. Soon a diverse fan base developed and magazines around the world began to take notice. Following their high school graduations in 2004, The Like signed to Geffen Records and toured with Phantom Planet and Maroon 5, bands which, like The Like, are part of a Los Angeles music scene that also includes bands such as Rooney and Giant Drag. Since forming, The Like have drawn major media attention and have been featured in magazines such as Teen People, ELLEgirl, Nylon Magazine, and Rolling Stone.

They toured with Tori Amos on her Summer of Sin tour, and with Kings of Leon. The Like released their first album, Are You Thinking What I'm Thinking?, through Geffen on September 13, 2005. The album is a combination of reworked songs previously released on their independent EPs as well as new material. The band performed at the Coachella Valley Music and Arts Festival and at the O2 Wireless Festival in Hyde Park, London. In September 2006 The Like supported Muse on a short string of tour dates in the U.S., before heading to Europe to support Razorlight.

The band, original members Z Berg and Tennessee Thomas plus new recruits Laena Geronimo and Reni Lane, have left the studio and headed straight out on tour with the Arctic Monkeys in the US.

The band starred in a short film commissioned by designer Zac Posen as a way to promote his Target fashion collection. The film shows the band hanging out in a hotel room and then performing the single ?Fair Game?. The film was directed by Gia Coppola (granddaughter of Francis Ford Coppola)

Are You Thinking What I'm Thinking?