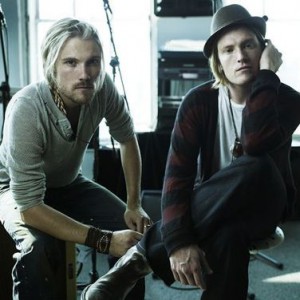 Quietly considered one of New York City's most promising independent acts (sold out Bowery Ballroom, Top Ten sales CMJ week at both NYC Tower Record Stores), THE KIN's sound is a dynamic musical exchange between Australian brothers Isaac and Thorry Koren. These lads write their own material, play multiple instruments, and have self-produced / self-released two full LPs (Tracing, 2004, Rise & Fall, 2007), two five song EPs (Red & Black 2005), and a 'Live at The Bowery Ballroom' DVD (2006). They are currently in the studio recording their next LP.

THE KIN's rock/pop music is passionate, raw and poetic. The New York Times describes them as "bombastic," TimeOut NY calls their music "soulful," and Billboard claims, "The Australian siblings have a radiant gift for songwriting and performing...hearing their partnership is a humbling experience." Isaac remarks, "We play for the soul of it, the love of it and the need to do it." Thorry adds, "Our music comes from making those eloquent mistakes."

Their songs are featured on both commercial specialized programming (Q104.3 NY, 104.7 MA, WMMR) and independent radio (WZBC Boston, XM Radio). They are selling out box offices regionally from Boston to DC and have opened for such major touring acts as Bon Jovi, Men at Work, The Saw Doctors, P.U.S.A and Lez Zeppelin. With the help of Tower Records and independent stores across the Northeast and Mid-Atlantic, THE KIN have sold over 10,000 units on their own.

Twenty-thousand miles away from home, THE KIN are turning heads and making fans with their compelling live shows and solid songwriting. "We want people to be uplifted, to feel a heightened sense of self," says Isaac.

The Kin are going in to the studio in September 2008 to record for their next full-length album due out in 2009.