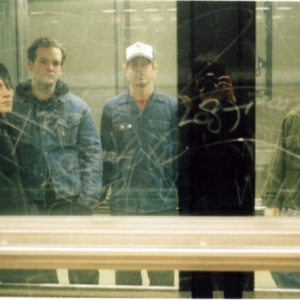 The Bronx are a band from Los Angeles, California who began playing punk rock in 2002. Their original goal was to bring passionate, blood-and-sweat punk rock into the 21st Century. Their first self-titled album was released in 2003 on White Drugs. For their second self-title the band signed with Island Records and went on to play music with a hard rock influence that still retained their original punk stylings.

The Bronx has since returned to punk rock, yet uniquely with a dual mariachi persona, as is planned for their upcoming double release. The current line up is: Matt Caughthran (vocals), Joby J. Ford (guitar), Ken Horne (guitar), Jorma Vik (drums) and Brad Magers (bass). They were signed to Island Records shortly after they were formed, with the popular belief being they only had twelve live shows under their belt. Ex-Guns N' Roses guitarist Gilby Clarke helped The Bronx produce their first Demo.
The band retained the rights to their self-titled debut album which was released through licensing deals in several territories via their newly formed label, white drugs. It was around this release that they quickly garnered a rabid following in many parts of the world - namely the United States, UK/Europe and Australia - as the result of heavy touring, intense live shows and their unusual blend of 1980's punk and modern day rock music.

The Bronx's style is influenced by bands from the 1980s Californian punk scene, such as Black Flag, Fear and Suicidal Tendencies - with subtle DC influences such as Bad Brains and Fugazi. This is blended with more traditional big rock guitar riffs and a hardcore style of drumming to further intensify the band's unique style.

To date, the band has released one full self-titled album (2003) as well as the limited edition "Bats!" (Tarantulas) and "La Muerte Viva!" (Wichita & Shock) EP's. A live DVD, titled "Live At The Annandale" was recorded at the Annandale Hotel in Sydney, Australia and released by, White Drugs.

In August 2006, former The Dragons guitarist Ken Horne became an official member of the band.

The bands most recent release (2008) was again self titled, and released on White Drugs. In 2009, the band, under the deceptive pseudonym Mariachi el Bronx, released an album entitled "El Bronx". It featured all band members playing mariachi music.