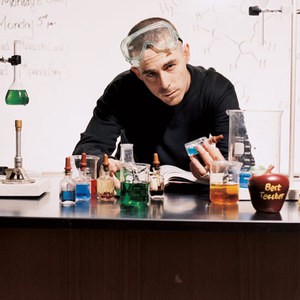 Alan Daniel Maman (born October 25, 1977), better known as The Alchemist, is a hip-hop producer and MC. The Alchemist has been an active producer since 1993. He hails from affluent Beverly Hills, California. After rising to prominence in the late 1990s as a close associate of Dilated Peoples, he went on to produce for many of hip-hop's leading artists in the 2000s. As a teen, Al began to identify strongly with the rebellious lyrics and urban sounds of hip-hop, and he began writing his own lyrics as a creative outlet.

As a teen, Al began to identify strongly with the rebellious lyrics and urban sounds of hip-hop, and he began writing his own lyrics as a creative outlet. He joined up with other like-minded artists who wrote lyrics and rebelled strongly against their "uptight" suburban surroundings, among whom were Shifty Shellshock of Crazy Town, Evidence of Dilated Peoples and Scott Caan, son of James Caan. They would often hang out in urban areas of Los Angeles and participated in typical teenage rebellious activities like partying, smoking marijuana, and general mischief.

Al and Scott decided to become a duo named The Whooliganz. While rhyming at a party in L.A., they attracted the attention of B-Real of Cypress Hill. He invited the teens to join his crew, The Soul Assassins, which also included the groups House of Pain and Funkdoobiest. In 1993, the Whooliganz released their first single, "Put Your Handz Up." The song received little radio airplay and their record label, Tommy Boy Records, decided to shelve their album. Rejected, Scott focused his creative energy on acting while Al became interested in process of making hip-hop beats.

DJ Muggs took Al under his wing and taught him how to use a sampler and mixing board. After helping to produce a few tracks for Cypress Hill, Al became the main producer for his childhood friend, Evidence and his group Dilated Peoples. When Dilated debuted in 1998, they were an underground sensation creating a huge buzz about the man behind those incredible beats.

In 1999, Muggs introduced Al to his good friends, the popular hip-hop group Mobb Deep. Al produced two songs for their Murda Muzik album. Impressed by his production skills and street smarts, Mobb Deep took him under their wing, using his beats on all their subsequent albums. As Alchemist's profile increased, he went on to produce for many of hip hop's most successful and prominent artists, such as Nas, Fat Joe, Jadakiss, Ghostface Killah and Snoop Dogg. He has also remixed songs for bands and artists in other genres such as Linkin Park and Morcheeba. Al stayed loyal to his old friends, continuing to produce for Dilated, Cypress Hill, Everlast (formerly of House of Pain) and Crazy Town. He also enjoys producing for lesser-known underground rappers, often giving them some of his best beats. In 2004, 11 years after his rapping career folded, The Alchemist returned with his long-awaited debut album, "1st Infantry." The album yielded the hit single "Hold You Down" (featuring Prodigy, Illa Ghee, and Nina Sky), which hit number ninety-five on the Billboard Hot 100 in 2005.

Alchemist was the official tour DJ for Eminem on his 2005 Anger Management 3 Tour, replacing the recently-ousted DJ Green Lantern. However on July 13 2005, the tour bus carrying Eminem's entourage (including rapper Stat Quo as well as Alchemist) swerved off the road and turned over. Alchemist was treated for broken ribs and a collapsed lung.

His latest album, Chemical Warfare, was released in 2009.