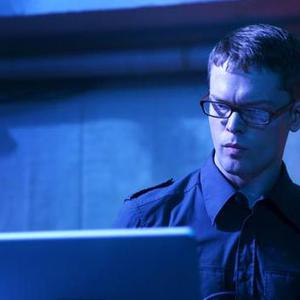 There are multiple artists named Surgeon. 1) A techno project by Anthony Child. Surgeon is the pseudonym of Anthony Child, an English electronic musician and DJ. Child releases music on his own labels Counterbalance and Dynamic Tension. Established imprints, such as Tresor, Soma, and Harthouse, have also released Surgeon's original material and remixes. He has also been recognized as one of the first wave of DJs to use Ableton Live and Final Scratch to supplement his DJ sets.

1) A techno project by Anthony Child.
Surgeon is the pseudonym of Anthony Child, an English electronic musician and DJ. Child releases music on his own labels Counterbalance and Dynamic Tension. Established imprints, such as Tresor, Soma, and Harthouse, have also released Surgeon's original material and remixes. He has also been recognized as one of the first wave of DJs to use Ableton Live and Final Scratch to supplement his DJ sets.
Child grew up in Kislingbury, a village in Northamptonshire. In 1989, he moved to Birmingham to study audio-visual design, played in a jazz/rock/fusion band called Blim, and learned to DJ from friend Paul Damage. At that time, there were no Techno clubs in Birmingham so he and his friends started House of God, and by 1991 he was DJing there regularly. In 1994, he released his eponymous debut EP on Downwards Records.
Surgeon's musical style is characterised by his incorporation of the more cinematic and left field aspects of his musical background into his club-based material. His production, remix, and DJ repertoire are inspired by krautrock and industrial music bands such as Faust, Coil, and Whitehouse. In particular, the extent of Coil's influence is such that most of the track titles from Surgeon's Tresor album "Force and Form" are direct references to Coil recordings. Child also draws influence from Chicago house, Techno, Dub music, and Electro, and also from non-musical works by Mike Leigh, David Lynch, William S. Burroughs, Bret Easton Ellis, and Cindy Sherman.
Child is also known for several significant artist collaborations in his career. These include tonal experiments with Mick Harris, British Murder Boys with Regis, and most recently with Ben Sims as Frequency 7.

1) Since exploding onto the techno scene in 1995, with the now-classic 'Surgeon EP', DJ and producer Anthony Child has been remoulding his area of contemporary techno. His early releases on Downwards caused a ripple of excitement through the techno cognoscenti of the time, leading to more widespread exposure via remix work for Dave Clarke and inclusion on Jeff Mills seminal 'Live At the Liquid Rooms CD'. Further output on Downwards, such as the 'Pet 2000 EP' (containing the familiar growl of 'Badger Bite'), along with releases by label mates Regis, Female and Portion Reform, helped to place Birmingham boldly on the techno map.

However, these early works, for all of their raw energy and their unusual harsh, funky edge were merely hinting at what was to come. Surgeon's more esoteric influences began to manifest themselves on his first Tresor album release 'Basictonalvocabulary', a record which contained a depth of musicality, without sacrificing any of the edge of earlier works.

This idea of balance between the dancefloor and more cerebral influences was to become a recurring theme in future releases, through the 'Balance' album for Tresor and, later, Surgeon's own Dynamic Tension and Counterbalance label releases. This became increasingly evident as Tony's ability to incorporate the more left field aspects of his musical background into his club-based material developed. Tape based experiments from 1984, which can be heard on the 'Boys, School Showers and Swimming Pools' release on Downwards, show a pre-Surgeon fascination with experimentation and the diverse influences of Industrial music and Musique Concrete became more apparent in each Surgeon release.

Evidence of a new, darker direction began to show through on the 'Force and Form' and 'Body Request' albums, but came to the forefront on the more recent Counterbalance releases. It was becoming obvious that Surgeon's output was more heavily influenced by Coil and Brett Easton Ellis than by Jeff Mills or Underground Resistance.

Since the first British Murder Boys release, Surgeon and Regis have worked closely together, recording several more eps and performing live. The BMB releases have further blurred the line between techno and the artists' industrial and experimental roots, marrying off-kilter noises and submerged vocals with a strict rhythmical framework.

Further evidence of these multi-functional production skills can be seen on Surgeon's impressive remix C.V. Alongside remixes for techno luminaries such as Dave Clarke, the Advent, Rue East and Luke Slater, he has produced reworks for Glasgow post-rock outfit Mogwai (moulding their Fear Satan track into a droning Boyd Rice-like crescendo which takes the original to its logical conclusion) and old masters Faust and Coil.

As a compliment to his production work, Surgeon is also an in-demand DJ, with a busy work schedule spread across Europe, U.S.A and Japan. He has been a resident at House of God in Birmingham since 1993 and also held a three year residency at Berlin's famous Tresor club.

Contemporary Surgeon sets have been notable for an experimentation with new DJ technologies, breaking out of the standard format of two record decks and a mixer to embrace cutting edge hardware and software solutions, blurring the line between a DJ set and a live performance.

Almost a decade on from the initial impact of the thumping introduction of 'Magneze', Surgeon continues to use techno as a vehicle to carry his artistic message. Oblivious to current trends (although often helping to set them), his work continues to be deep and expressive but still carries through in a club environment. A perfect dynamic tension; balance and counterbalance.

January 1, 2012 - SURGEON release their debut EP as a free/pay what you can download, now available at: http://surgeonmusic.bandcamp.com

Search Deep Inside Yourself (EP)