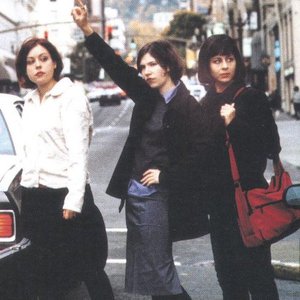 Sleater-Kinney was an alternative rock band which formed in 1994 in Olympia, Washington, United States. The band's most prominent lineup was Corin Tucker (vocals, guitar), Carrie Brownstein (vocals, guitar) and Janet Weiss (drums). Before Weiss, the band had a succession of drummers, including Lora Macfarlane, Misty Farrell and Toni Gogin. The group's name is derived from Sleater Kinney Road, Interstate 5 off ramp #108 in Lacey, Washington, the location of one of their early practice spaces.

The group's name is derived from Sleater Kinney Road, Interstate 5 off ramp #108 in Lacey, Washington, the location of one of their early practice spaces. They formed in and were a vital part of the riot grrrl and punk scenes in Washington, although they later relocated to Portland, Oregon. Throughout its existence the band was often noted by critics for its "anthemic" feminist message, its willingness to reinvent the musical palette of punk rock, and its consistency in producing highly acclaimed albums.

Corin Tucker formed Corin Tucker Band in 2010, and provided backing vocals to Eddie Vedder's "Into the Wild" soundtrack album in 2008. Brownstein, who had written for "The Believer" and "Slate" while still in the band, became a writer for NPR. Her blog, Monitor Mix, was active from 2007 to 2010. Brownstein also formed the band Wild Flag in 2010 and created, co-wrote and co-starred in the sketch comedy series "Portlandia" which began airing on IFC in early 2011.

No Cities To Love (Deluxe Edition)