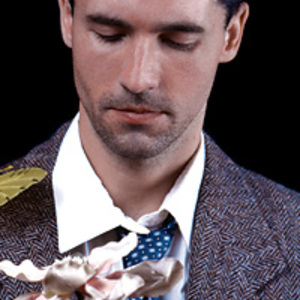 Royal Wood is a Canadian pop music singer-songwriter/ producer, based in Toronto, Ontario. His classic pop style has drawn comparisons to Hawksley Workman, Ron Sexsmith, Randy Newman and Rufus Wainwright. Biography Early Life Born and raised outside of Peterborough, Ontario, Royal Wood grew up in a household filled with music. He began playing piano by ear at the age of four and started lessons at age eight.

Born and raised outside of Peterborough, Ontario, Royal Wood grew up in a household filled with music. He began playing piano by ear at the age of four and started lessons at age eight. With the support of his school music program, he had access to a variety of different instruments, and by his teens, he became well-versed in many different instruments, including the guitar, bass guitar, drums, clarinet, and trumpet.

After high school, he studied business at McGill University. During this time, he had limited access to a piano, and focused on his guitar playing while trying to find his voice as a songwriter.

Wood released his first EP, entitled The Milkweed EP, in 2002. This collection of songs were written, arranged, performed and produced by Wood himself. The release garnered much critical acclaim, and critics drew comparisons with Randy Newman, Jeff Buckley, and Tom Waits.

Following the release of his debut EP, Wood set out to create an over-the-top pop record for his full-length debut. Drawing inspiration from The Beatles and The Beach Boys, Wood once again undertook production duties during the recording sessions. In 2004, he released his full-length debut record, Tall Tales on Maple Music. The record's ornate sound and layered arrangements garnered much critical attention, and Wood was praised for his vocal style and infectious lyricism.

With the goal of creating a more mature and pristine sound, Wood entered Toronto's Reaction Studios in 2005 to begin recording the follow-up to his full-length debut. During the recording session, he used a Steinway grand piano, scored a full string quartet, and also enlisted the help of many well-known musicians, including Hawksley Workman and Kurt Swinghammer. The result was A Good Enough Day, which was released in 2007 on Dead Daisy Records in Canada, and in 2008 on Rounder Europe. The record received much radio attention domestically and abroad, and Wood was praised by critics for his fluent piano playing, melodic lyrical style and production ability.
The record spawned three singles and three music videos, ?A Mirror Without?, ?Juliet? and ?I'm So Glad?. Music from the record has also been featured on several TV and movie soundtracks, including TMN/Movie Central's Regenesis, the CBC series This is Wonderland, the CTV movie Playing House, the film The End of Silence, and the Food Network's The Surreal Gourmet. Internationally, A Mirror Without was featured on an episode of Grey's Anatomy.

With the success of A Good Enough Day, Wood was invited to share the stage with numerous Canadian songstresses, including Emm Gryner, Sarah Harmer[16], Kathleen Edwards, Sarah Slean, Jill Barber and Serena Ryder.
In support of the Rounder Europe release of the record, he also embarked on a European tour in 2008.

Constantly evolving, Wood wanted to focus his next effort on the lyrics and string arrangements. The result was the 2009 release The Lost and Found EP. With a consistently growing fan base, Wood embarked on his first headlining tour in Western Canada in November, 2009 in support of the new EP. Joined by Atlantic Canadian singer-songwriter Rose Cousins, Wood played to capacity crowds during three-week tour.

In 2010 he released "The Waiting" after which he was named iTunes Songwriter of the Year. With the release of The Waiting he has an upcoming national theatre tour with David Gray and more in the works.

Ever After The Farewell

I Wish You Well

Forever And Ever (CDS)

Not Giving Up (CDS)

We Were Born To Glory

The Lost And Found (EP)