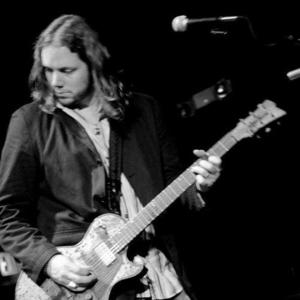 Rich Robinson's talents are already familiar to the millions of fans who've embraced his work as guitarist/songwriter/co-founder of the Black Crowes. But his debut solo effort Paper is a potent musical statement that's likely to come as a pleasant surprise to even his most ardent admirers. The self-produced album - on the artist's own Key Hole label - finds Robinson singing lead and playing most of the instruments on 14 original compositions that reveal the young veteran to be both a distinctive, eloquent lyricist and an engaging, expressive singer.

The self-produced album - on the artist's own Key Hole label - finds Robinson singing lead and playing most of the instruments on 14 original compositions that reveal the young veteran to be both a distinctive, eloquent lyricist and an engaging, expressive singer. While rockers like "Know Me," "Enemy" and "Yesterday I Saw You" embody the ballsy, rootsy crunch that put Robinson's former band on the map, Paper also encompasses a more thoughtful, introspective side, as well as an unmistakably adventurous sonic vision that manifests itself in the acoustic, orchestral and psychedelic textures of such tunes as "Veil," "When You Will," "Falling Away" and "Forgiven Song."

Paper is the product of a lengthy period of personal and musical self-discovery that began when the Black Crowes - the band Robinson formed with his vocalist brother Chris while both were in their teens - went on indefinite hiatus early in 2002. During their 13-year, seven-album recording career, the group almost singlehandedly restored raunchy, no-frills rock 'n' roll swagger to commercial prominence, while earning a near-mythical reputation for its combustible internal chemistry.

"After the Crowes broke up," Robinson explains, "I sat around for a few months and spent time with my family, and then I started trying to figure out what I wanted to do. It was a struggle for awhile, because at the time there were a lot of family deaths and various weirdness that happened all at once, and I'd never really had to deal with that kind of stuff before. And I'd been in the Crowes for my whole adult life, so when it stopped, it was like, 'Well, what the hell am I supposed to do now?'"

Robinson built a recording studio in his Connecticut home, did some writing and producing with other artists, and made his first venture into film soundtrack work by writing and performing the score for the 2002 feature "Highway". He also developed his longstanding interest in painting into a fulfilling creative sideline. Meanwhile, he continued to write songs.

As an outlet for the new compositions he'd been accumulating, Robinson formed a four-piece band, Hookah Brown, which hit the road in early 2003 for an extended club tour that won enthusiastic notices from fans and critics alike. But, having spent his entire musical career as a team player, he eventually realized that he was in no rush to return to the politics of band life, choosing instead to shoulder the burden of a solo career.

"Eventually I just said 'Screw it, I'll just do it myself,'" he recalls of his decision to become a frontman. "I'd never really sung lead, so I started taking singing lessons, and the first lesson showed me what I'd been doing wrong, and I immediately became a stronger singer. I started thinking about writing lyrics that worked for my voice. And I tried playing some shows and singing, which was fun, and that built up my confidence about singing."

Robinson recorded Paper largely on his own, cutting tracks in old-school analog style and playing most of the instruments except drums, which were provided by Joe Magistro. The album also features guest appearances by ex-Black Crowes keyboardist Eddie Hawrsch and BR549's Donnie Herron on fiddle and pedal steel.

"It was a little weird," Robinson admits, "because I'd never made a record without my brother before and I was used to having a bunch of people in the studio. But it was also cool, because I was learning new things and because I felt like I was able to create something new, without the baggage of my musical history."

Robinson took Paper's iconoclastic focus a step further by deciding to build his solo career from the ground up, bypassing the music industry's unwieldy machinery. "At some point I realized that I just didn't want to deal with record companies anymore," he states. "I don't want to deal with anyone telling me to change my songs or what producer to use. I don't want to spend six million dollars making a record and then worry about having to sell six million records to pay for it. So I decided to try doing it myself. The music business is kind of like Rome burning right now, and I don't think the traditional record-company methods work anymore. I think that music's going back to the underground way of doing things, and I'm excited about being a part of that."

Rather than coasting on his formidable past successes, Rich Robinson is clearly thrilled to be conquering new creative territory. "This whole project," he asserts, "has been a completely positive situation from the start. There's no stress, no bullshit, and I'm really excited about the whole thing. I'm really happy with this record, which was my only goal. And now I'm looking forward to getting it out there and playing these songs on tour, and seeing what happens."

Through A Crooked Sun