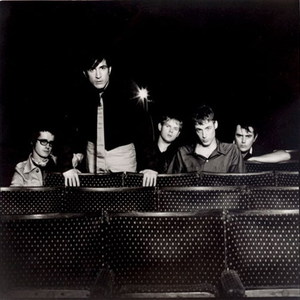 Rialto were a Britpop band of the late 1990s in the UK and known as that unlucky band who were dropped twice from East West Records. The band grew from the Oxygen/MCA Records act Kinky Machine that featured singer Louis Eliot (pictured, second from right) and Johnny Bull (pictured, far right). They released their first album, Rialto in 1998, and their second, Night on Earth in 2002. Their most famous single is their debut, 'Monday Morning 5:19'.

However the single 'Untouchable' charted higher at number 20 in the UK. Jonny Bull has recently been co-writing songs with singer/songwriter Lily Allen at his studio in southwest Portugal, one of which, Friday Night, features on her debut album Alright Still.

Rialto signed to EastWest Records and set about recording their debut album. However after releasing a number of singles they were dropped, without their album being released. China Records signed up the band and agreed to take on the manufacturing and promotion of their debut album. Unfortuately for the band, China was in the middle of being taken over by Warner Music, EastWest's parent company. Once this deal was completed the band found themselves back on EastWest, who quickly dropped them for the second time.

Rialto is also the name of a one man solo project from New Zealand. His music can be generalized as Cinema-Electronic-Emotion. His first release is based on the script of the famous "Brat-Pack" film The Breakfast Club, with the single called John Bender Is A Badass. http://rialto.bandcamp.com/