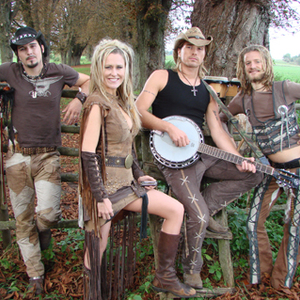 Rednex is a Swedish manufactured eurodance band using a country image. They had an international hit with the song "Cotton Eye Joe" in 1994. Although extremely popular in the Netherlands, Austria, and more specifically, Sweden--Germany, UK, USA, scoring such hits as "Old Pop in an Oak" and "Wish You Were Here,"--"Cotton Eye Joe" remains Rednex's sole hit in the United States.They have had more than a dozen top ten hits 3 albums, and are currently making a 4th studio album. The REAL MEMBERS OF REDNEX ARE: SCARLET , DAGGER, ACE RATCLAW AND JOE CAGG. SEE:

IN 2009 Scarlet Dagger, Ace Ratclaw and Joe Cagg took back to the stage after a small break and are currently toruing the globe. There have been many reports of old members passing off as rednex in shows and some have even been listed here in tour schedule. Please be careful ... if these shows are not listed as Scarlet Dagger Ace and Joe Cagg.. then it is NOT the real Rednex that is today supported by REDNEX AB- the one and only official holders of the trademark.

Anyway You Want Me (CDS)

The Best Of The West

Rednex "The spirit of the hawk" (single)

The Spirit Of The Hawk (Single)

The Way I Mate (Maxi)

Wish You Were Here (Maxi)