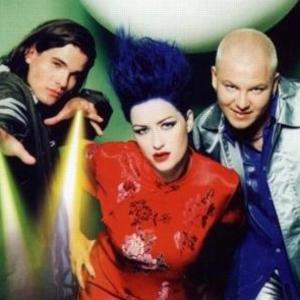 There are at least 5 bands called Daze: (1) a Danish dance/bubblegum trio from the late 90's, (2) a rock band from Switzerland, (3) a pop punk band from New York, (4) a rock band from Russia, (5) a French electronic producer/ dj. 1. Daze is a Danish eurodance project of Johnny Jam & Delgado (Aqua, Me & My). Daze's career has really turned into a true fairytale for singer Trine Bix and her two partners songwriters/musicians, Sieber and J.T. - the trio which constitutes the turbo-pop-phenomenon Daze.

1. Daze is a Danish eurodance project of Johnny Jam & Delgado (Aqua, Me & My). Daze's career has really turned into a true fairytale for singer Trine Bix and her two partners songwriters/musicians, Sieber and J.T. - the trio which constitutes the turbo-pop-phenomenon Daze.

With their first single - Superhero - Daze broke the sound barrier in their home country, where this song quickly became the fastest selling single of 1997 (if you count out Elton John), reaching for example # 6 in Israel. Since then Superhero has been awarded both Gold and Platinum all over Scandinavia, where Daze continue their quest for the top of the charts. The two follow-up singles Toy Boy and Together Forever (The Cyber Pet Song) - formerly known as Tamagotchi - have both ruled the radio stations in Finland, Norway, Sweden and Denmark. Together Forever is a tribute to Virtual Pets all over the world and especially the most famous of them all, the Tamagotchi. When the debut album, Super Heroes, was released in October 1997, it immediately charted, in Finland with a peak at No. 1 and in Denmark with a peak at No. 3.

In Norway the album has turned Gold. Scandinavia has taken to Daze in such a way that more than 250,000 copies of the Super Heroes album have leapt over the counter. In February 1998 Daze received a Grammy Award for best Dance Album of 1997 at the prestigious Danish Grammy.

Despite the fact that Daze's career is still new, they have already given loads of concerts all around Scandinavia and are certainly fit for fight now that the fairytale continues outside of the Nordic countries. All over the world the belief in Daze and their hitmaking ability is so high that the group's very first album Super Heroes has become a major priority everywhere - which means that Daze and their energetic pop songs will reach out to all corners of the world, from the US to Taiwan, from the UK to Portugal, during 1998.

First international single Superhero has already gained attention in the US with a peak as #27 in Billboards Hot Dance Music / Maxi Single Sales and a first week entry in the Hot 100 Singles Chart as #88. The video can be viewed at The Box (US only). In the UK, the single peaked in the PopChart as #3.

The recipe for this success is the most classic of pop stories - Bix, Sieber and J.T. write the kind of songs that you simply cannot get out of your head again. And the producers behind the album are amongst the heavyweights of today's modern popmusic - Johnny Jam , Dean'N'&M?gtz (Maria Montell, Me & My) and The Uhlmann Bros (Dr. Alban).

1999 : after almost 2 years of silence, Daze is back with a new single entitled 15 Minutes Of Fame announcing their new album They Came To Rule. But this track didn't have the success expected.

2000 : thier second single 2nd Chance was released. Its radio version was totally reworked by DJ Jurgen (who produced Alice Deejay's first single) and it has fantastic female vocals, and great synths.


2. Daze is a Rock band from Z?rich Switzerland, they exist since 1998 and after some changes
in the lineup they're back with new power as you can hear on the new demo from late 2008:

"Tracks"
"What You're Giving To Me"
"Build a Wall"
"Self-assured"

"I think Daze are very different from any other band that I've heard in the whole 20 years of my life."
KIMBERLY LEWIS, FREELANCE MUSIC JOURNALIST (UK)

"I know that Daze has the potential to peak the charts with their unique and always classic rock sound."
PUUDA MAGGUI, BLOG-WRITER (US)

"All I can say, is that they rock!"
BEEWAX, MINERVA GRUNGE SITE (P)

4. Daze are a rock band from Petrozavodsk, Russia.
MySpace

5.Daze is a French electronic producer and Dj
MySpace

They Came To Rule