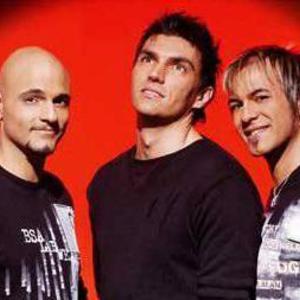 Eiffel 65 is an Italian eurodance group, formed by producers/composers Jeffrey Jey (also vocals), Maurizio Lobina and Gabry Ponte. All three members are from the city of Turin (Italy). The name of the group came from a random word generator that produced the word "Eiffel". The "65" was added as a mistake: part of a phone number scribbled on a demo by accident. Their greatest worldwide success came with their first single "Blue (Da Ba Dee)" from their 1999 album Europop.

Their greatest worldwide success came with their first single "Blue (Da Ba Dee)" from their 1999 album Europop. peaking at #1 on the UK and Australian charts, and peaking at #4 on the US charts, followed by "Move Your Body" peaking at #3 in the UK. Their second album Contact! was released in 2001, to moderate success in Europe. Their third self-title album was released in 2003, featuring mostly Italian lyrics. A couple months later a double-disc special edition came out that featured the English versions of the songs as well as a few remixes.

In 2005, Gabry left the group to focus on his solo career. In 2006, Jeffrey and Maurizio left the label Bliss Corporation and together formed the group Bloom 06. They released two albums, two EPs and several singles.

In June 2010, Massimo Gabutti, managing director of Bliss Corporation, announced the return of Eiffel 65 in its original formation. Jeffrey, Maury and Gabry are currently working on a brand new studio album.

Viaggia Insieme A Me (Vinyl)