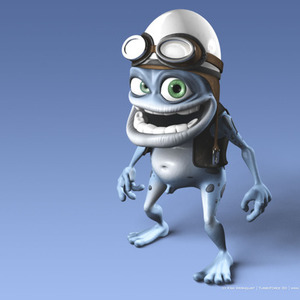 Crazy Frog is a character used in the marketing of a ring tone based on The Weird Annoying Thing, a computer animation created by Erik Wernquist. Marketed by the ringtone provider Jamba!, the animation was originally created to accompany a sound effect produced by Daniel Malmedahl while attempting to imitate the sound of a two-stroke moped engine. The Crazy Frog spawned a worldwide hit single with a remix of Axel F, which reached the number one spot in the United Kingdom, Turkey, New Zealand, Australia and most of Europe.

The success of "Crazy Frog Presents Crazy Hits" along with the "Axel F" single has irritated and baffled many critics and musicians. This is mostly due to the Frog's constant chart domination despite the hatred of so many, and the frustration of legitimate musicians selling well below him.

In 1997, 17-year-old student Daniel Malmedahl recorded himself impersonating the noises produced by internal combustion engines. He posted this on a website and caught the attention of a Swedish television researcher, who convinced Daniel to perform the sound live on air. After the annoying thing debuted on television, recordings of his performance began appearing on peer to peer file sharing networks and various websites under the filename "2TAKTARE.MP3" ("Tv?taktare" is Swedish for "Two stroker").

The sound effect was quickly included in Flash animations that spread virally among Internet users becoming an Internet meme. The most notable example was the Insanity Test, which challenged test subjects to keep a straight face while staring at a still photograph of Rubens Barrichello in a Ferrari Formula 1 car as the sound effect was played.

In late 2005, Malmedahl's fellow Swede Erik Wernquist encountered the sound effect and was inspired to create the 3D animation "The Annoying Thing" to accompany it. Erik used the LightWave 3D modeling application to produce the animation and posted it on his website. The animation was a popular attraction at Erik's website, but the sound was credited to "Anonymous". Eventually, word reached Daniel that his impressions had been used in a now well-known animation. He contacted Erik, apparently giving an impromptu performance to confirm his claims. Erik was convinced, and gave credit to Daniel for his creation. It was broadcast for the first time on two Belgian commercials for Ringtone Europe and Jamster Belgi? (now both merged into Jamba!) in mid-2004.

In 2005 Henning Reith & Reinhard Raith produced "Axel F" (a remix of the 1980s Harold Faltermeyer song), which was released on May 23, 2005 and became one of the most successful singles of the year 2005. "Axel F" debuted at number one in the UK, remaining there for four weeks. The song was then knocked off the charts by rapper 2Pac's single 'Ghetto Gospel'. Similar success took place in Australia and many parts of Europe, and the song remained on the charts for many months in various countries worldwide. However, the song apparently failed to catch on as well in the US and Japan, where it reached #50 and #48 respectively. The "Axel F" music video was produced by Kaktus Film and Erik Wernquist, and centers on the pursuit of the Crazy Frog by a bounty hunter. He reprises his role as pursuer of the Crazy Frog in all subsequent videos.

Popcorn (a remix of the Hot Butter song) was released on August 22 and premiered with a choreographed cheerleader performance on Top of the Pops. It also reached #16 in Australia and Top 20 in much of Europe, in many cases while "Axel F" was still charting.

Riding on the popularity of these initial single releases, an album entitled Crazy Frog Presents Crazy Hits was released on July 25. It contained several Frog remixes of existing songs like "Pump Up the Jam" and the Pink Panther theme, as well as several original tracks such as "In the 80's" and "Dirty Frog". It reached #5 in the UK, #8 in Australia and topped the charts in New Zealand. Surprisingly the album performed much better in the US than the "Axel F" single, reaching #19.

A special Christmas edition of Crazy Hits with numerous holiday-themed bonus tracks was released in November, backed with a double A-side single release of "Jingle Bells/U Can't Touch This". The single peaked at #4 in Australia and #5 in the UK.

In May 2006 the Crazy Frog contributed two tracks to a British compilation album entitled Football Crazy released to coincide with the 2006 World Cup ? "Ole Ole Ole (Do the Froggy Wave)" and "Na Na Na, Hey Hey". A second album entitled Crazy Frog Presents More Crazy Hits was released in June 2006, continuing in the musical vein of the first release with Frog versions of songs such as "Ice Ice Baby", "I Will Survive" and "I'm Too Sexy". The second single release is "We Are the Champions (Ding a Dang Dong)", again a World Cup-oriented track perhaps drawing inspiration from the earlier Football Crazy songs.