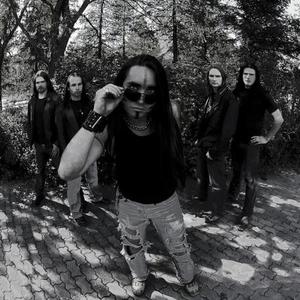 The Random Eyes saga began in 1999 when guitarist and songwriter Timo Kuusj?rvi met vocalist Christian Palin while both were serving in the Finnish army and the two became fast friends through their mutual musical interests. It would be a few years later in 2002 that Kuusj?rvi and Palin would come across eachother again and began forging towards a common musical goal. Over the course of early 2002 Christian met co-vocalist Katja Rimpel?inen after running across the young lady while she was performing on a specific occasion.

Over the course of early 2002 Christian met co-vocalist Katja Rimpel?inen after running across the young lady while she was performing on a specific occasion. Captivated by the talent behind the graceful voice, Christian presented the idea to Katja of singing alongside himself in a duet-lead metal band.

Acquiring the additional talents of second guitarist Mikko Tuliniemi along with drummer Timo Peltokangas and bassist Jukka Koponen, the band took on the name Random Eyes and entered themselves in a nationwide band contest which was held in M?nts?l?, Finland in the spring of 2002. Random Eyes claimed the gold at the event, coming across as the most complete unit with the advent of only three songs. Convincing both the public and the judges, Random Eyes quickly became a hot topic through word of mouth and media coverage of the event.

After their victory however, it would prove that bassist Koponen felt that Random Eyes just wasn?t his calling, leaving the band in the process. New bassist Timo M?ki-Marttunen filled the gap in quick order and a third guitarist came into the Ramdom Eyes line-up in the form of Samuel Hoisko, who was a fantastic lead player.

Random Eyes continued to gig around Finland, adding to their fanbase and making a name for themselves among the melodic metal fans around the country. The band compiled a set of songs and headed to the studio in the autumn of 2002. Along with producer Arttu Sarvanne of the acclaimed Studio Watercastle in Jyv?skyl?, Finland, Random Eyes recorded their debut album "Eyes Ablaze", which was released in February 2003. Playing alongside Swedish neo-classical metallers Narnia in Keuruu, Finland, the album release gig was a massive success, witnessed by hundreds of fans.

Random Eyes is music for the new generation, melodic metal for the masses! Finnish metallic rock has a new face, burning with Eyes Ablaze!

RANDOM EYES is most definitely a LIVE band, exuding strong charisma and energy from the stage, in addition to killer attitude. RANDOM EYES are on a mission to bring hope and light to a world caught in disarray and chaos.