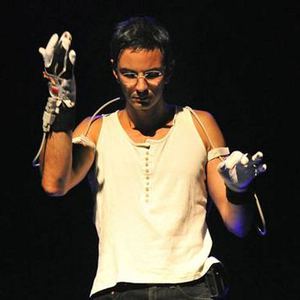 Rafael Toral plays experimental electronic instruments. Strongly interested in phrasing, he calls his style "post-free jazz electronic music", described as "a brand of electronic music far more visceral and emotive than that of his cerebral peers". Toral's innovative Space Program, while researching performance possibilities, delivers music that is full of clarity, articulating silence and sound in a thoughtful, yet physical way.

Formerly known for his drone/ ambient work with guitar and electronics and records such as "Wave Field" (1994) or "Violence of Discovery and Calm of Acceptance" (2000), in 2003 he terminated that line of works to completely renew his approach to music, launching the Space Program in 2004.
In 2006 he released "Space", followed by "Space Solo 1" in 2007 and "Space Elements Vol. I" in 2008. Also in 2008 premiered the Space Collective, a slowly developing orchestral group.

The Violence of Discovery and Calm of Acceptance