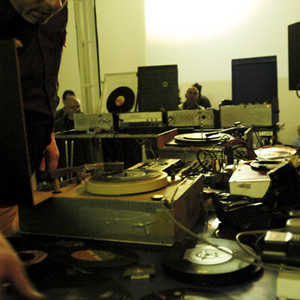 Philip Jeck (born 1952) is an English multimedia composer and choreographer from Liverpool. He is perhaps best known for his work Vinyl Requiem with Lol Sargent (a performance for 180 Dansette record players, 12 slide-projectors and 2 movie-projectors) which won the Time Out Performance Award in 1993. He is signed to the UK label Touch. Philip Jeck studied Visual Arts at Dartington College of Arts, Devon, England.

Philip Jeck studied Visual Arts at Dartington College of Arts, Devon, England. He began exploring composition using record players and electronics in the early 1980s. He has performed solo shows throughout Europe and in Japan and USA. He has composed and performed scores for dance and theatre companies including Anatomy Performance Co., Yolande Snaith Theatre-dance, Movie'n'Opera (Vienna), Laurie Booth and Steve Paxton. He has also composed scores for dance films Beyond Zero (Channel 4) and Pace (BBC 2).

In addition, he has worked extensively with the choreographer Laurie Booth, is a member of Slant, and has had tracks released by Blast First (on the Deconstruct compilation) and The Soundworks Exchange (First Edition).

Philip Jeck has performed versions of his turntable pieces throughout the world, including a 2007 performance of his prior release Vinyl Coda I-III in Bangkok, Thailand, as part of the Bangkok International Art Festival. Workshops he has conducted include an event at the School of Audio Engineering in Bangkok organized by the British Council.

An Ark For The Listener