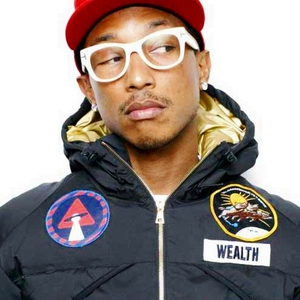 Pharrell Williams aka Skateboard P (born April 5, 1973 in Virginia Beach, Virginia) is one half of the primarily hip hop music production and songwriting duo, The Neptunes (with Chad Hugo) as well as rap/rock group N*E*R*D with Hugo and Shae Haley. As part of The Neptunes Pharrell has produced numerous number one tracks for megastars such as Madonna, Mariah Carey, Beyonc&eacute; , Britney Spears , Snoop Dogg, Gwen Stefani, Nelly, Justin Timberlake, Mystikal, Jay-Z, *NSYNC, Shakira, Ciara and others.

Pharrell was born the oldest of three sons to Pharaoh Williams and Carolyn Williams. His father was a handyman, and his mother was a teacher. In seventh grade, Williams met fellow band mate Hugo. The two began working together, mixing beats and playing in various live bands in which Williams played the drums. In 1992, while the two were attending different high schools in Virginia Beach, they sold their first song, "Rump Shaker", to Wreckx-n-Effect. They then began songwriting and production assignments with popular hip-hop artists such as Noreaga, SWV, Total and Ma$e.
In August 2002, The Neptunes were named Producers of the Year at both The Source Awards and the Billboard Music Awards.
In 2002, Williams wrote and produced rapper Nelly's single called, "Hot in Herre," the single hit No.1 in the US and the UK. He repeated the success by doing the same with Britney Spears' dance-pop single, "I'm A Slave 4 U". But it wasn't until the summer of 2003 that Pharrell released his first solo single, "Frontin'" featuring Jay-Z. The album The Neptunes Present...Clones was then released, debuting at number one in August 2003.

"Frontin'" was a big summer hit (the No. 34 biggest single of 2003 according to Billboard Magazine), and kept Williams' momentum running up to the release of Hugo and Williams' second funk/rock-oriented N.E.R.D album, released in March 2004. Williams' rock credentials were further bolstered by his appearance at the 2004 Grammy Awards, performing The Beatles' "I Saw Her Standing There" on drums along with Sting, Dave Matthews, and Vince Gill. Pharrell went home with two Grammy Awards that night, one for Producer Of The Year, Non-Classical, and another for Best Pop Vocal Album for his work on Justin Timberlake's No.2 Billboard hit Justified. [1]
In 2005, Williams was voted "Best Dressed Man in the World" by Esquire magazine. His look has inspired such acts like Mario and Eric West. On September 9th, 2005, Pharrell performed the opening single from his debut solo album "In My Mind". The song, titled "Can I Have It Like That", featuring Gwen Stefani, blends a smooth synth with a few drum rolls and heavy bass. "In My Mind" has 14 tracks, 7 hip-hop tracks and 7 R&B tracks featuring numerous musical guests such as Gwen Stefani, Daddy Yankee, Vanessa Marquez and Jay-Z. The album cover for In My Mind is designed by Japanese brand "A Bathing Ape". Williams has now started his own fashion label called the "Billionaire Boys Club" with the designer from A Bathing Ape.
Over the past two years, Williams has been romantically linked to Sir Mick Jagger's socialite daughter Jade and to an American Woman named Vashtie. Rumors have been swirling about the couple, some saying that Vashtie is pregnant and others saying they are seperated.
His Debut album "In My Mind" was released July 25th, 2006.
In 2006 Pharrell Williams partnered with Turner Network Television for a special 2006 NBA All-Star Game promotion. In 2006, Pharrell solely produced The Clipse's second album Hell Hath No Fury. Most critics labeled the album to be Pharrell's best production in years, and put the Virginia rap duo back in the charts.[8]

On May 16, 2007, for seven days only, the first of two expected collaborations with Madonna, entitled "Hey You", was made available for free download from the MSN website. MSN, in conjunction with Madonna, donated 25 cents for each of the first 1 million downloads to the Alliance for Climate Protection, in support of Live Earth. [9] Later that year, Pharrell performed songs at the Concert for Diana on July 1, 2007. Then on July 7, 2007 he performed at the Brazilian leg of Live Earth at Rio de Janeiro.
A second album, entitled Out of My Mind, was recorded with his newly formed band "The Yessirs" featuring Questlove of The Roots. However, Pharrell's record label did not think that a companion album to the first would sell well.[10] He also produced Beyonc?'s rendition of "Diamonds Are A Girl's Best Friend". He then wrote and produced "Why Should I Be Sad" on Britney Spears' fifth studio album, Blackout. He also produced two songs from The Hives album, The Black and White Album, titled "Well All Right!" and "T.H.E.H.I.V.E.S.".