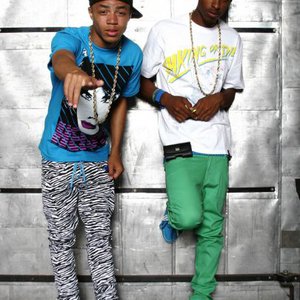 The New Boyz are a hip hop group and jerkin' crew from Hesperia, California comprised of rappers Earl "Ben J" Benjamin and Dominic "Legacy" Thomas. After meeting as freshmen at Hesperia High School they released their debut single You're a Jerk, which was based on the local dance style of jerkin'. It became a national hit and paved the way for them to release their debut album Skinny Jeanz and a Mic in September 2009 and release another successful single, Tie Me Down featuring Ray J.

New Boyz are the 18 year old rappers that lead the jerk movement. They made the hit song "You're a Jerk." New Boyz started in 2008 as an underground youth phenomenon from the high desert of southern California, but in only a matter of months, they've become rising stars on a national level. In this short time period, 18-year-olds Ben J and Legacy have gone from shows in local high school gyms to performing on the red carpet at the BET Awards and booking an impressive lineup of concerts across the country.

This astounding jump comes from the success of their song ?You're a Jerk,? a hypnotic dancefloor-filler that the New York Times called ?pretty much perfect.? Though it started as a favorite on MySpace, it has turned into a certified hit. It not only became the most requested track on influential L.A. radio station Power 106, but it's taken over playlists around the country. During its first week for sale on iTunes, ?You're a Jerk? sold over 53 thousand copies.

The duo of Ben J (born Earl Benjamin) and Legacy (Dominic Thomas) met as freshmen at Hesperia High School in San Bernardino County. Both were part of the same extra large rap group, but then each left to become solo artists. With their October birthdays only a day apart, they pooled their gift money to buy rudimentary recording equipment. After Legacy transferred to a new school, they decided to combine forces as New Boyz, creating a sound, slang and fashion sense that's made them the biggest hip-hop group to emerge from L.A. in years.

While ?You're a Jerk? has helped bring New Boyz global recognition, the song has also shown a spotlight on Los Angeles' growing, and teen-driven, jerk music movement. Jerk music is a stripped down party sound, largely created on home computers for kids with crazy haircuts, and has been building in popularity around the city for years. The neon bright video for ?You're a Jerk? features appearances from many of the rubber-limbed dance crews associated with the scene. In fact, it was these dancers that helped popularize the song in the first place, taking it from MySpace to YouTube and eventually gaining the attention of radio DJs. ?We just did ?You're a Jerk' as another song, the fans are the ones that did all the promoting,? says Ben J. ?They started making jerk video after jerk video after jerk video to it.?

Though ?You're a Jerk? is the first single from Skinny Jeanz And A Mic, their forthcoming album on Asylum/Warner Brothers, New Boyz is bigger than just one sound. ?People think we only do jerk music, but we do a whole lot of everything,? says Legacy. ?The album's about the typical teenage life.? For instance, ?Colorz? finds them repping the colorful clothing worn by today's youth, while ?Tie Me Down? takes on girls who are overeager to lock them down in relationships.

Though Skinny Jeanz & A Mic features the sonic imprint of modern movements like hyphy and Atlanta's own teen rap madness, it's also heavily influenced by the minimal bass and drum machine sound from hip-hop's earliest days. While Legacy handled the distinctive production on half of the album, including ?You're a Jerk,? initially this move was done out of necessity. ?I knew if we didn't make our own beats, we'd have to pay people, and we didn't have any money at the time,? says Legacy. ?I had to teach myself to make beats. I'd watch YouTube for tutorials.?

For the rest of the album, New Boyz are going into the studio with Diplo, the internationally respected DJ and producer responsible for MIA's ?Paper Planes,? but are also working with other young L.A. producers including JHawk, Jukebox, Talent and Jay-Nari. The results only enhance Skinny Jeanz And A Mic's celebration of teenage talent. ?They're kids like us,? says Legacy.

Too Cool To Care