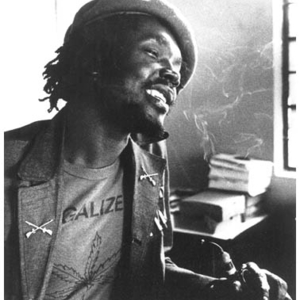 Peter Tosh, born Winston Hubert McIntosh (19 October 1944 ? 11 September 1987), was a Jamaican reggae musician who was a core member of The Wailers who then went on to have a successful solo career as well as being a trailblazer for the Rastafari movement. Peter Tosh was born in Petersfield (Westmoreland, Jamaica) with a father and mother too young to take care of him. He grew up raised by his aunt.

Nicknamed 'Stepping Razor', he began to sing and learn guitar at an early age, inspired by American radio stations. After an illustrious career with The Wailers and as a solo musician, he was murdered at his home during a robbery.
He often struggled in Jamaica with his group the Wailers (aka the Wailing Wailers - the group included Bunny Wailer and the world-renowned Bob Marley). Tosh joined them on a tour of England in 1972. This was to become his first step to world fame, as during this trip the group signed with Chris Blackwells' Island Records. Their first album for this record label was the classic LP Catch A Fire. This album represented an entirely new breed of reggae, which meshed Jamaican roots riddims with American soul music and British rock.
A tour of America and Britain followed as well as several successful albums. However, tension grew within the group, especially between Peter Tosh and Bob Marley, as Tosh witnessed Marley's persona within the group overshadow his own. Both Tosh and Bunny Wailer left in 1975 in pursuit of solo careers.
Tosh's solo career included a series of major hits. The year after his departure from the Wailers he released Legalize It, a record heavily promoting Rastafarian issues, most notably the use of marijuana to which the title refers. To this day the song "Legalize It" is regarded as an anthem for many promoters of marijuana legalization.
More important than this however was his political impact, especially in pro-black questions. Whilst his former band mate Bob Marley became world renowned for his uplifting but universally relevant spiritualism, Tosh was always more interested in catering to the more militant pan-Africanists of the world. His third album, Equal Rights, released in '77, is a prime example of such, including songs like African, Downpressor Man and Get Up, Stand Up.
However, this Africanist approach to politics made many label him a hypocrite when he in '78 signed onto the Rolling Stones label and started associating with Keith Richards and Mick Jagger. This unsuccessful business relationship soon ended as Peter Tosh was unhappy with a lack of exposure.
After an illustrious career with the Wailers and as a solo musician, Tosh's life was cut short when he was brutally murdered at his home. Though robbery was officially stated as the reason for Tosh's death, many believe that there were ulterior motives to the killing, citing that nothing was taken from the house.