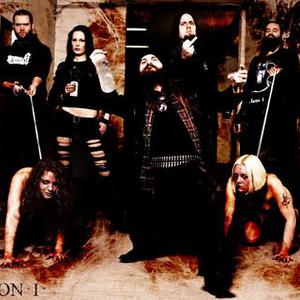 Formed in late 2002 and hailing from the city of Oslo in Norway, Pantheon I is an extreme metal band that combines brutality, aggression and speed with heart-wrenching melancholy. Rather than resorting to the use of synths with string samples, the symphonic aspects of their music are highlighted by the use of the cello. The current line-up is composed of KVEBEK on guitar and vocals (DEN SAAKALDTE, ex-1349), SAGSTAD on guitar (TROLLFEST, SARKOM), T.R.S. on bass (1349, DEN SAAKALDTE), MADS G on drums (THE ALL SEEING I, ZEENON), and LIVE JULIANNE on cello.

PANTHEON I's 2003 demo received an excellent response from the metal underground, and was followed by a 7? in 2004. ?Atrocity Divine?, the first full length was released, or should we say ?hijacked? by a Japanese underground label. The band themselves don't even own copies of this album, since the smartass label more or less disappeared, but every once in a while a copy will turn up at concession stands at festivals.

In 2007 PANTHEON I signed to Candlelight Records, and released their second full-length album, ?The Wanderer And His Shadow?. The album was released in both the USA and Europe, and received great reviews. Following the release of ?The Wanderer And His Shadow?, PANTHEON I focused on taking their fast and brutal music directly to the masses, playing outside of Norway for the first time when they accompanied MAYHEM as the main support band for 8 gigs in France. Since then they have played several one-off gigs, including the Interregnum festival in Germany, and the Jalometalli Festival (with SATYRICON, MAYHEM etc.) in Oulu, Finland. In October 2008 Pantheon I headlined their first tour abroad with a 4 gig mini-tour in Finland

2009 was an eventful year for PANTEHON I. In January they toured Finland as main support for KEEP OF KALESSIN on a 4-gig tour. The week after returning home the band recorded the song ?I'll Come Back As Fire?, which features in the American horror film ?Someone's Knocking At The Door?. They also appeared at the Inferno Festival in Oslo, and wrote and recorded their third full-length album ?Worlds I Create?, released by Candlelight in July. This album received great reviews, such as 5 in Kerrang!, 8 in Metal Hammer and 8,5 in Terrorizer.

In the autumn of 2009 PANTHEON I toured Europe as main support for ABSU, playing 23 gigs in 23 cities over the course of 23 days. After coming home from this tour, PANTHEON I set out again, this time for Russia, where they headlined two festivals, in Moscow and Nijny Novogrod.

From The Abyss They Rise

The Wanderer And His Shadow