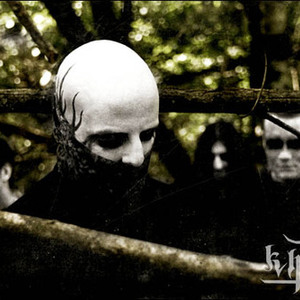 Khold is a Norwegian Black Metal band formed in 2000 after the split-up of Tulus. The band plays mid-paced and somewhat "groovy" black metal and has a history of touring with bands such as Behemoth and Satyricon. Unlike many of their Norwegian peers, Khold, or Tulus if you like, never gave up their mother-tongue, performing their lyrics in Norwegian exclusively. The words aren't written by an actual member of the band, more an affiliate, which in this case is the girlfriend of main-man Gard, Hildr.

Unlike many of their Norwegian peers, Khold, or Tulus if you like, never gave up their mother-tongue, performing their lyrics in Norwegian exclusively. The words aren't written by an actual member of the band, more an affiliate, which in this case is the girlfriend of main-man Gard, Hildr.

History:
Khold is based in Oslo, Norway and was formed by Sarke (drums) and Gard (vocals/guitar). These two musicians came from the band/project Tulus, and Khold was formed because of a desire to be a "real band", with a steady, complete lineup, and opportunities to play live shows. They recruited two musicians to fit the empty slots: Rinn (also from Sensa Anima, guitar), and Eikind (bass). A demo was recorded, and in late 2000 Khold was signed by Moonfog.

The first Khold album, Masterpiss of Pain was released spring 2001 and critics referred to the album as "a fresh breath upon the black metal scene". In the fall 2001 Khold went touring in Europe to support their first album.

Khold's second album Phantom was released in the spring of 2002 on the Moonfog label. Because Khold at that time did not have any bass player, after Eikind left in the fall of 2001, former Tulus bassist Sir Graanug was hired during the Phantom recordings. Brandr was then helping out for a couple of gigs until Grimd joined in the fall of 2002.

In the autumn of 2002 Khold joined forces with Satyricon on a Nordic tour. During the spring of 2003 they once again joined Satyricon for another six weeks, this time on a European tour.

In the late summer 2003 Khold recorded their third album M&oslash;rke gravers kammer and also made a video for the song D&oslash;d. The album was released in the spring of 2004 by Candlelight records. During spring of 2005 Khold went on yet another Norwegian tour.

Both Phantom and M&oslash;rke gravers kammer were nominated for the Alarm-award the year of their release.

In the spring of 2005 Khold recorded their fourth album, Krek, which was released October 10th 2005 by TABU records.

On Easter 2006, Khold was put on ice for an undetermined length of time. The reason given was that the members needed time to think. Gard and Sarke will continue Tulus (as a project), and Rinn is currently building a studio to record/produce bands, as well as contiuning with Sensa Anima.

In June 2008 the band released their fifth album Hundre &Aring;r Gammal, and by that marks that the thinking-break is over. Khold is back!

Khold plays their unique music in a raw, primitive and dark manner using only guitars, bass and drums. Still they have a very up-to-date, cutting edge in their sound. The lyrics are all written in ancient Norwegian in order to, in a truly poetic fashion, enhance the songs' concepts. In terms of actual sound, the heaviness and clarity is way beyond in quality what you find in most other (old school) black metal bands; usually old school black metal sound production is barely beyond four or eight-track demo quality.