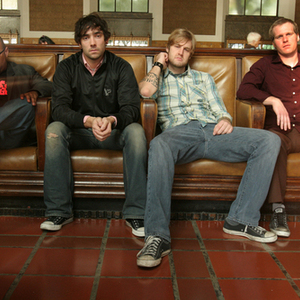 Open Hand was formed in Hollywood in 1999 by guitarist/vocalist Justin Isham, bassist Michael Anastasi and drummer Alex Rodriguez. Determined to escape the confines of hardcore, the early incarnation of the band tempered its frantic riffing with lush melodies, intricate instrumental passages and a keen sense of dynamics. Open Hand quickly built a massive buzz in the underground scene. A band's band from the beginning, Open Hand was offered tours with the likes of Glassjaw, The Juliana Theory and Thursday.

Open Hand quickly built a massive buzz in the underground scene. A band's band from the beginning, Open Hand was offered tours with the likes of Glassjaw, The Juliana Theory and Thursday. Those early tours and two acclaimed EP releases on its own American Propaganda label, Radio Days (1999) and Evolutions (2000), helped spread the buzz. Both EPs quickly sold out and soon the band was the talk of major label A&R reps ? though perhaps too soon. After a couple of false starts with the majors, Open Hand opted to sign with the highly regarded indie Trustkill Records in 2002.

The following year, Trustkill issued The Dream, a collection of the band's long out of print EPs with a couple of new bonus tracks. In spite of the material being a few years old, The Dream quickly became a favorite of fans, artists and critics around the world ? topping countless Best Albums of 2003 lists.

In 2005, Trustkill issued the follow-up, You and Me, which met with rave reviews and was rated "album of the month" by Rock Sound in the UK. The stylistic departure from The Dream was huge: with most of the original members departed in favour of other projects, lead singer Justin Isham began working on a sound more akin to the Queens of the Stone Age, among others. The original concept for the album was a military story, traces of which are still evident in songs like Trench Warfare and The Ambush, but was quickly discarded on the advice of Isham's friends and bandmates.

Open Hand's third album, Honey, was released April 20, 2010 on Anodyne Records. The band expanded on the layered, guitar-heavy Queens of the Stone Age sound they forged with You and Me, but Honey also saw the band experimenting with other styles and directions, such as on the hip-hop infused "The Valley" (featuring Christopher "Kid" Reid from Kid n' Play) or the trashy riot grrl number "The Angels." Matt Talbot of Hum and Brodie Rush of Be/Non also contributed vocals for the record.

Jammin' On the Breaks

The Later Stages of Now