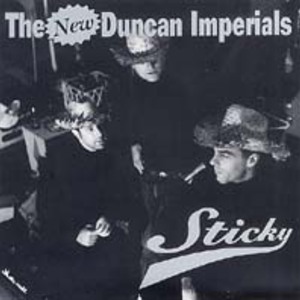 The NDI saga began in Chicago in the spring of 1989. Bored with the straight-ahead approach of the band they were in, Pigtail Dick (guitar and vocals), Skipper Zwackinov (bass, balloons, and vocal), and Goodtime Dammit (drums, drums, drums) began playing for laughs in the basement of Pigtail's mom's house. "She really, really hated us," Goodtime recalls. "That's when we knew we were onto something." The band focused on laying strange yet sharp lyrics. "Most of our songs were about food, or driving, or how to prepare intricate chicken dishes while driving," says Skipper.

"A lot of people didn't get it, but the ones who did loved it." Their first gigs, noisy slugfests in cramped dives around the seedy parts of Chicago, are now the stuff of legend. It wasn't long before the band was the toast of the town, and soon one of the most widely-read rock critics in town, Bill Wyman of the Chicago Reader, had annointed them "The Best Band in the City." The Chicago Tribune followed suit (adding the word "live" to the title), and the boys were in business.


Not satisfied with controlling the Chicago scene, they were soon invading nearby towns, eventually ranging as far south as Louisiana and as far north as Winnipeg. Over time, NDI established a fan base that has evolved and grown along with the band. With the release of each new CD (see Loser Tunes), they have managed to expand their warped vision while remaining true to the power and simplicity that got them where they are in the first place. Fans have responded by gobbling up each new release: according to Pravda Records, NDI has sold a combined total of 60,000 records; no small feat for a band that has shied away from major label distribution. In addition to their full length CDs, the band has put out a slew of outtake cassettes, CD singles, vinyl 45s, videos and the recently released Greatest Bits enhanced CD, a compliation of old and new favorites what were voted on by fans for inclusion on the album.

Ten years in any business is a long time, and in rock and roll, it is a rare feat. "There are so many bands that started out when we did, or even after we did," says Pigtail, "and we look around now and they're all just gone. It's strange to be the survivor surrounded by so many casualties." To celebrate their tenacious grip on life, the band is busy recording the gargantuan new CD Sticky. "Its kind of like our red sports car," says Goodtime. "We may have few years on some of these kids, but we can still go really fast and make one hell of a lot of noise."