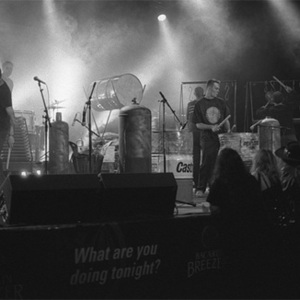 There are multiple artists using the name Militia: 1) Militia is a Belgian industrial percussion band. It was founded in 1989 by the multi-instrumentalist Frank Gorissen and wind instrument player Jo Billen and now 6 musicians are involved. The band is known for its use of self made percussion and wind instruments and the scrap material they transform into musical instruments. The band's music is often inspired by the anarchic and atheist social views and their concirn about our natural environment, themes that can be found in most of their lyrics and statements.

2) Militia is an Italian post-punk / alternative rock from Perugia. Militia was born officially in late ?82 when a post-punk band called Strange Militia, formed in 1979 (before as Lo Noize), disbanded. Founder members: Dario Bavicchi (keyboards, electronics, guitar and vocals), Fabrizio Croce (rhythms, electronics and vocals) and Giovanni Romualdi (guitars). Bass players were, in chronological appearance, Augusto Croce (late founder of ?Aidons La Norvege'), Nicoletta Vinti (late in London with ?The Passions' and with ?Trans-Global Underground' original line-up), Claudio Castrini, Andrea Conversano (a long-time member of the band), Arlo Bigazzi (solo-artist and founder of Materiali Sonori Label) and Aroldo Toccaceli. Without a bass player the three remaining members are still continuing in 2006 as open line-up featuring part-time collaborators.
The Live activity of Militia was developed between 1984 and 1992 with tours in Germany and in Holland and concerts all over Italy; they performed in the most representative italian Clubs and billed in the most important Festivals of that period, contributing to start an italian ?new-wave? scene. During their career they received sincere appreciation worldwide. At the end of the ?80's Militia started a partnership with Materiali Sonori label, the oldest italian ?indie?. 2 records will be produced with this important label: ?Dunarobba? and ?Elvengamello?.
In early ?80 they owned with a group of friends a legendary alternative Club called Suburbia in Perugia suburbs.
The first part of the Militia career is signed by a classical wave production, dark atmospheres and really energetic post-punk bases. With the Dunarobba record starts an experimental itinerary that it will continue until the last works.
Since 1996 Militia started also to work for avant-garde Theatre, Cinema and visual arts.

3) Militia is a punk rock band from Gladstone, QLD, Australia. Their website is http://www.myspace.com/militiaonmyspace

4) Militia is a rap group from California, USA, best known for their hit "Let's Burn".

5) Militia is a rock / metal band from Fife, United Kingdom.

6) Militia is a speed / power / thrash metal band from Texas, USA, formed in 1984, releasing a few demos and an EP before splitting up. Now they are reunited.

7) Militia is a British thrash metal band based in Barnsley, lcally famous for such hits as "Cataclysm" and "Silence". http://www.facebook.com/MilitiaMetalBarnsley